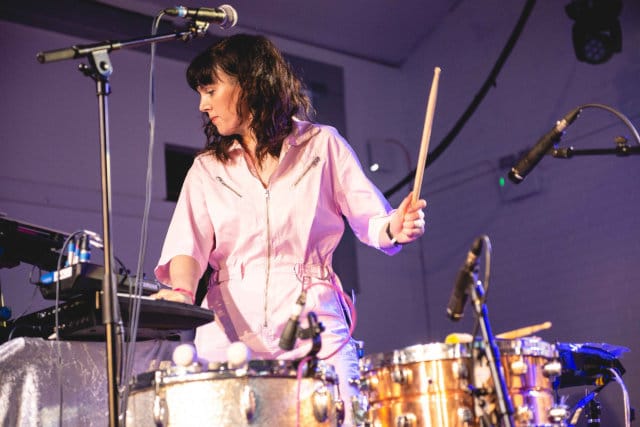 One of the most charming things about East London’s Visions Festival is its lack of showiness. Year after year it quietly goes about its business with little overt fanfare, but with a great deal of thought for the punters. Queues are kept to a minimum and flow quickly, there is ample provision of sustenance and intoxicating liquid and the line-up is diverse and well thought out, minus desperate trend chasing. Happily, it’s a course the organisers have stuck with for the eighth edition.

Given this small Island’s propensity for unpredictable summers, at first it seems a little sad to be sinking into the depths of London Fields’ Hangar for the first set of Visions. It’s a bright, warm day after all, and with cheeriness in short supply of late it’s tempting to linger in Space Studios Courtyard and sup a cold one in the lunchtime sun lest hellfire ascend at any moment.

Nevertheless, below pavement level Bristol’s Scalping await. Gloomy as the space may feel, having clambered down from the midday sun, the four piece soon lighten the senses with a ferocious show. Combining much of what their native city has excelled at both past and present, the band smash out a pounding set of techno pulses and the untamed spirit of punk rock.

The menacing nature of the electronics paired with the savage poise of the instrumentation is a heady brew, and one the drop kicks you into visions with no apology. Scalping’s set builds to a climax as punishing as it is euphoric with their compulsive debut singe Chamber. Their electro, noise rock hybrid and trippy back projections less ease you in to the festival as it has you chomping at the bit for a full on rave.

If Scalping leave you all fired up and ready to carry on stomping, emergence into the harsh sunlight blinking like a newborn soon sobers the senses. After a quick breather it’s down below again for band of the moment, Black Country, New Road who offer a contrast to the hedonistic impulses brought on by the Bristolians. The Speedy Wunderground-affiliated six-piece seem to be currently sharing a similar buzz to label mates Black Midi did pre-debut album. Having formed only last year and with just a pair of singles currently on offer, the Cambridge band are surfing the buzz. The room is rammed to welcome the group on to the stage and they deliver on the intensity that both Athens, France and Sunglasses have promised on record.

In some respects they emanate a ramshackle vibe, but their music feels far more measured and studious than first appearances allow. Mad, unpredictable tempos, wayward horns and frenzied vocals do little to disguise a deliberate air that hangs over their music. They are a band that stimulate the senses fully and it will be interesting to see how they develop. 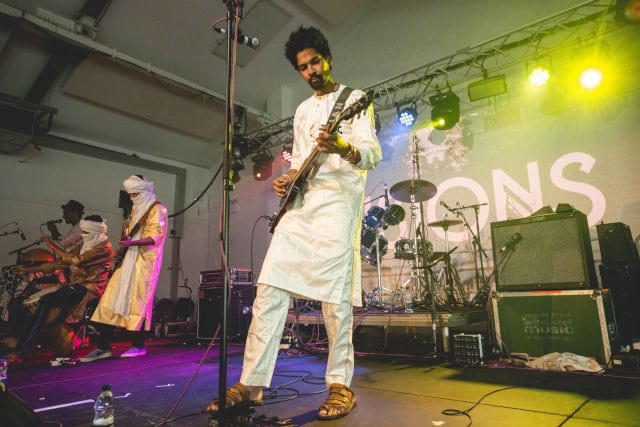 Next, a change up, both musically and environmentally. Oval Space offers natural light, airiness and Algerian Tuareg desert rock quintet Imarhan. Their dancing tempos and infectious energy soon ripples out across the crowd for a lively afternoon set. African rhythms and instrumentation are met with dynamic rock riffage for a deeply nuanced performance of skill radiance. The contrast with the earlier bands only highlights what visions does best – dish up a wonderfully diverse line up that feels effortlessly, and often unexpectedly, complimentary.

Following a break out on the venue’s decked terrace, it’s back in Oval Space for classical-electro-pop crossover wizard Anna Meredith. Currently prepping for the release of her follow up to 2016’s spectacular Varmints, Meredith and band are on typically excellent form. Perhaps they are feeling reinvigorated by the chance to try out new material, but then anyone who has previously caught their shows will know this energy, enthusiasm and supreme skill is deep and unwavering.

It’s nigh on impossible to grow tired of the pristine pop of Something Helpful or the batshit drive of R-Type. Live, yet again, they display next level brilliance. That said, it’s genuinely exciting as they begin Paramour, the first single from the forthcoming Fibs. Given the track is accompanied by a madly ambitious video, the band do well to match that wonder. Meredith and band are on top form, as goofy, self-deprecating and joyous as ever. Roll on the release of Fibs.

In a turn of events few would have anticipated, a certain Newcastle four-piece are riding high with some of the heaviest music to get national radio airplay for longer than anyone would care to remember. The rise of Pigs Pigs Pigs Pigs Pigs Pigs Pigs has been a delight to witness, and while the four fellas in the band clearly don’t take themselves too seriously, the music is no joke.

The quality of the latest release, King Of Cowards, paired with their blazing live show has landed them a headline set at Hangar. And they prove why they’ve earned the attention of every sweaty body that squeezes into the venue to witness the power of Pigs. Whopping riffs, pulverising beats, deep psych jams and frontman Matt Baty’s endearingly savage poise are an electrifying combination. The success of singles like Cake Of Light, GNT and A66 have ensured an enthusiastic shouting-along contribution from the audience, and on the strength of their performance, it’s what Pigs deserve and then some.

As hordes stumble out into the streets with big ol’ grins and a serious case of the meat sweats, Visions draws to a close for another year. Punters might be thankfully replete for now, but give it a few hours. Bring on Visions 2020.