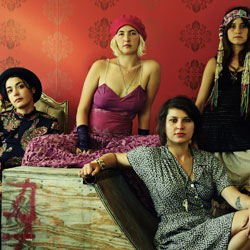 The wind howls and the rain sweeps horizontal across Brighton’s seafront, shadows flailing in erratic dance, and Warpaint seem appropriate. Their show tonight is anticipated by more than just the weather: it’s been less than a week since the LA four-piece released their debut album, yet spare tickets have been merely the stuff of rumour and wide-eyed, desperate plea for days.

Partly that’s the result of a hype machine eternally hungering for new meat: an all-girl band that don’t dress scantily, don’t seem utterly vacuous and actually write good songs were never going to be overlooked. But, for once, the attention is completely warranted: few albums receive the level of acclaim currently being heaped upon The Fool, and fevered, breathy accounts of their live performances have been a mainstay of blogs, radio shows and Twitter feeds since SXSW. The last time Warpaint were here, playing at Horatio’s for The Great Escape festival in May, they were one of the few bands that justified the pilgrimage to the end of the pier: anyone who’s done that walk, or been to Horatio’s, will know what an accolade that is.

Opening with the creeping menace of album standout Warpaint, the band take just moments to set their tone, basslines growling over echoing riffs and Emily Kokal’s hypnotic, liquid vocals. Like Tool, their songs are difficult to label and impossible to predict, siren-song melodies giving way to guitar swells and off-beat rhythms at any moment, the pace a living, shifting thing: Composure veers from chiming, repetitive chant to a maelstrom of drums and movement with no visible join.

Warpaint’s sound takes in grunge, shoegaze and psychedelica, but arguably owes most to post-rock, their fluid dynamics and soaring guitar lines a spikier, more focused Explosions In The Sky, their drums the proficiency and versatility of Battles. Vocally Metric‘s Emily Haines seems an apt comparison, both singers’ stage presence at once seductive and sweetly, terrifyingly intense. These are songs to get lost in, melodies wrapping around and tightening, their gloom a welcome suffocation. “Now I’ve got you in the undertow” sings Kokal on Undertow, but nobody’s struggling as the sound washes over, the band as lost as we are as they sway solipsistically, eyes closed.

They aim to close with Bees, the drums downbeat and decayed, guitar lines and ethereal melodies shivering over the top. The band toured earlier this year with The xx, and it’s here that their sounds cross over, the mood a 4am comedown of urban street-lamps and introspection. Yet whilst the latter trade on a kind of minimalistic exhaustion Warpaint are fiercely alive, their sound constantly evolving, new rhythms forging as songs mutate, expand, contract and explode.

When they finish nobody accepts it: above the baying of the crowd a voice through the speakers calls for one more song – “the voice of God” Kokal describes it as, and it doesn’t seem like an exaggeration. They respond with Elephants from last year’s Exquisite Corpse EP, a precarious marriage of Portishead vocals and the most danceable basslines of the night.

Complaints? Aside from the depressingly familiar fury at the percentage of the audience (a minority, but still notable) that confuse public space with their own living rooms and the quieter moments of a band’s set as their cue to yell louder, none at all. God no. Even the wind outside, redoubled in its earlier efforts to reduce Brighton to rubble, seems in key, Warpaint’s fading notes echoed in the driving rain and those lengthened, thrashing shadows.