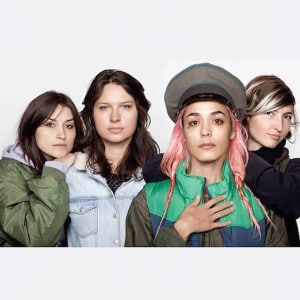 In the kingdom of the cliché, Warpaint walk softly and carry a small, subtle stick. Which they then proceed to weave hypnotically across the landscape while you sit, hands wedged under chin, bewitched.

Live they are loose, limber and remarkably unshowy. Even here, at what for most would consider a pretty large occasion, the band is minimally arranged over a tiny proportion of the stage. Which has been decorated soley by one of those coils of fairy lights you can pick up for a tenner in Ikea.

But there is an air of confidence in what they do. An air which has grown over the last few years. There exists an undeniable, implicit trust between the four people on stage, a trust in their ability to build these songs and let their audience go with it; a trust in the interactions and the interplays that allows them to play in a way which feels at least part improvised.

It’s cool, but not cold. Indeed, perhaps even more so than on record, in the flesh Warpaint are incredibly endearing. Something best demonstrated during the encore, as they perform Son (“there’s a first time for everything” Theresa Wayman remarks). On come two chairs and a keyboard. Out from behind the drumkit comes Stella Mozgawa to grab an acoustic and with Emily Kokal and Jenny Lee Lindberg on the floor it’s a lovely, intimate moment.

It is a little hard to put your finger on exactly what is so compelling. The groove certainly helps. Wherever you look, wherever they go, Lindberg and Mozgawa are driving things forward. On Disco/Very it’s all kinds of funky, yet somehow less toothy than the recorded version. On Undertow it’s perfectly, frighteningly in step, the perfect foil for Kokal’s increasingly desperate cries. On new song No Way Out the beats are glitchy and the bass almost dubby, but as before, those influences aren’t worn on sleeves.They’re shrouded and hooded and enveloped in a mysterious fug.

There’s also something lovely about the amount of ground they cover. From the slow and portentous Keep It Healthy, gloriously languid, slowly coming to blissful life, to the urgent and restless Elephants needling away with uneasy determination, there’s a real skill at work here.

They play another new one during the encore. I’ll Start Believing, which is louder, more riotous and hints at a grungier future direction. Although, from the way the band talk there is a sense of this being the last we may see of them for a time. So it may be a little while before we see exactly where that direction ends up. Tonight then, they leave us wanting more. Always the best way to depart.