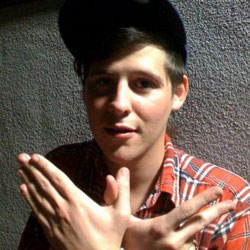 Bright, Young Californian Things WAVVES (pronounced “waves” and not “wavs,” oh, the shame of it) still just about manage to look like bright, young things, as they play to a reasonably well-attended Deaf Institute.

Much has been made of lead singer Nathan Williams’ wonderfully bizarre breakdown at Primavera Festival due to well-ahead-of-time alcohol addiction and drug use problems. On tonight’s evidence, WAVVES seem to be on calmer waters for the time being, at least.

By virtue of their turbulent Iberian travails, WAVVES are part of a fairly specialist rock family tree grouping to have suffered and survived near-terminal internal turmoil before most people had even heard of them. The line-up has already changed once due to infighting as a result of said breakdown. Talk about a band not doing itself a whole heap of favours.

There is, of course, a counter argument that suggests band soap operas create their own press – press that most well-behaved bands would gladly sacrifice a limb for. But no band is fondly remembered for a bunch of what-ifs and some forgotten news cuttings, no matter how much the rock rulebook decrees that opposing convention is a good thing. Even Bright Young Thing Craig Nicholls managed to get some music down before things went awry. Happily, WAVVES aren’t all misdemeanant bark and no real bite. Two albums in and there’s enough of a warrant to talk about this band in terms of its creativity and not its predilection for self-destruction.

WAVVES’ second album Wavvves (count the v’s), has been the recipient of a fair amount of praise, with comparisons to No Age, Deerhunter, The Wipers and even Sonic Youth, suggesting that Williams’ prodigious gift for three-minute fuzz-pop songwriting hasn’t gone unnoticed. One can’t help but feel that’s quite a bit of expectancy-related pressure for a guy that has already had a breakdown. If Williams has truly decided to go about things antithetically, it means the fatalistic spiral aversion reflex mechanism should now be in operation, with the best hopefully still to come from the San Diego native.

It goes without saying that being Californian and writing hooky little pop ditties comes automatically packaged with Beach Boys references. Even though there’s a tonne of lo-fi scuzz and a drizzle of no-fi synth to work through on Wavvves, the songs’ underyling melodies are unquestionably Californian and sun-drenched.

Live, things are a little different. There’s less fuzz (and no synth) and in its place are lashings of surf-rock reverb. The sound’s still Californian, but it’s less ’90s-era garage rock raw and more like an American bastardisation of ’60s Merseybeat. Williams even has a slacker McCartney head shake and cheeky grin to go with the jangling, three-chord pop.

Like the album, the only thing wrong with the performance is its slight monotonality. In saying that, it’s a loveable drone that suits Williams’ slacker/loner lyrical aesthetic. Tracks like No Hope Kids and I’m So Bored are spine-tingling evocations of the least spine-tingling feelings going: numbness and hopelessness. It’s good news Williams seems to have recovered from his addictions, because there aren’t many able to translate boredom with such precise and happy conviction.