by Andy Baber
published: 9 May 2018 in Live Music Reviews
Tweet 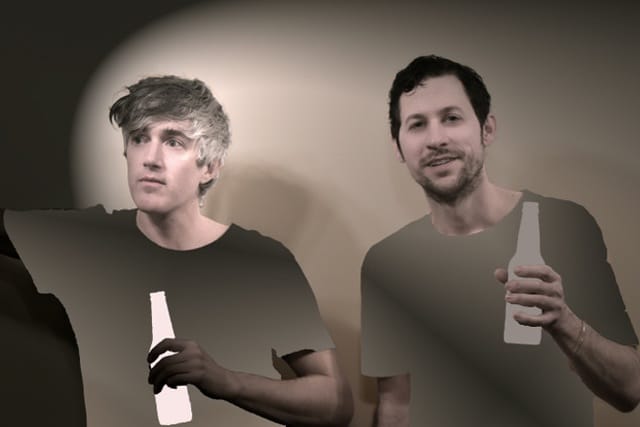 From the moment We Are Scientists walk on stage it’s clear that what will follow will be more than just another gig. The duo are famous for their off-the-cuff humour and they don’t disappoint during a career-spanning show at the Shepherd’s Bush Empire. Those familiar with their body of work will be well aware of their “banter” between songs and their London shows it off as Keith Murray and Chris Cain interchange quips throughout.

The New York pair clearly enjoy bouncing off one another and interacting with their fans. It’s part of the reason they have endured for almost two decades – their chemistry is unmistakable and being in their company is like hanging out with a couple of old friends. Yet as important as this is to their appeal, We Are Scientists would be nothing without their ability to deliver snappy, immediate pop-rock songs with an inherent danceability.

And all the hallmarks of the band at their best are in evidence on their return to London as the early outing of indie dance floor classic The Great Escape sets a buoyant mood for the evening. The giddy repetition of the track from their 2005 debut With Love And Squalor implores the crowd to join in before Buckle soon follows in a similar vein, with its rumbling riff building up to the huge sing-a-long chorus, as they hit the ground running.

But while many old favourites are present and correct, there’s also the small matter of a new album to promote and Megaplex gets plenty of opportunities to shine. Your Light Has Changed opens proceedings, with its heavy crunching riff prompting an early mosh pit frenzy, while Now Or Never transforms from being a so-so album track to something far more substantial as its chorus soars in its new live surroundings.

Interestingly, the synth-pop experiments on Megaplex – of which there are several – are kept to a bare minimum. Lead single and album opener One In, One Out is one of the few to make the cut and is just as fun and infectious as it is on the record, prompting the crowd to clear their throats once again, but it proves to be the exception. The decision to sideline the synths does mean the set runs seamlessly, however, and allows the band to give some love to each of their six studio albums.

Murray even alludes to the depth of We Are Scientists’ back catalogue during a wise-crack about being “able to play another set” before launching into Chick Lit and I Don’t Bite from 2008’s Brain Thrust Mastery and 2010’s Barbara, respectively. In fact, with so many to choose from, every song needs to earn its place and most do exactly that, especially fan favourites It’s A Hit and This Scene Is Dead, which are welcomed with open arms.

Of course, there is also still plenty of room for a few tongue-in-cheek moments sprinkled in here and there, with Cain encouraging those who were born in the Shepherd’s Bush Empire to raise their hands (half the audience, apparently). The pair’s energy is relentless from start to finish – even when they slow things down with Too Late and Make It Easy – and it translates to the rest of the room as they finish the main set with signature track, Nobody Move, Nobody Get Hurt.

The encore is just as breathless. Dumb Luck, from fourth album TV en Français, kicks it off with its snaking riff and addictive power pop chorus, before Nice Guys and Textbook complete a rousing finale to a show containing everything you could possibly want from the We Are Scientists live experience. There’s even time for Murray to crowd surf as a fitting reminder that while they are now middle aged men, they remain young at heart.