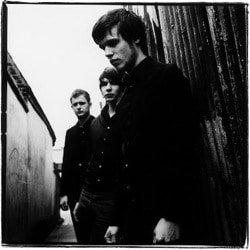 Seriously, ifWhite Lies carry on at this rate they’ll be playing Brixton Academy before Christmas. The 02 Arenabefore February.

Come the summer season, they’re going to have to try damn hard to find somewherelarge enough to fit everyone in. Belgium?

God only knows what will have happened by then. They’ll have almost certainly had the Bono-talk.They may have had a child by Gwyneth Paltrow. Hell, if Chubby Broccoli (or Emaciated Carrot orJust-Big-Boned Tomato) or any of the Bond producers get sight of them, then they’re a shoe in forthe next 007 theme tune.

Because, do you know what MI6’s finest actually wants? Fuck Chris Cornell, he wants lyricswhich either ask searching questions in plaintive tones or deliver grandiose statements asindisputable facts. Or, preferably, alternate between the two. He wants songs which swell, and thencrash. Swell, and then crash. Start quiet, and then grow to planet-swallowing waves of sound.

White Lies have that in spades. Which certainly goes some way to explaining why their rise has beenmetoric enough to cause most meteors to get all agoraphobic.

That, coupled to the fact that they don’t lack material. At all. They’ve got songs which sound likeDuran Duran. Songs which sound like Joy Division, New Order, The TeardropExplodes and, most remarkably, one which is the living spit of Vienna by Ultravox.

All of which are pristine, and some of which already seem to have captured the imagination in amanner belying a band only just playing their first (sold-out) London headline show.

New single Death does pulsatingly desperate romanticism in a manner that Editors, despitewatching Control literally 14 times a day, still haven’t got near to capturing, while UnfinishedBusiness is as stately and as epic as the QE2. Just a bit, well, cooler.

Both are sung back by the crowd in near-word perfect fashion, and both cause some quiteinappropriate air punching and baronial arm motioning by people who look, to the naked eye at least,like they should know better.

The other thing which masks White Lies relative inexperience is the fact they’ve already got thatwhole clinical Interpol’esque, “Yeah, we’re fucking ace, so what of it…” stage presence thatdressing all in black and hanging around in the presence of too much dry ice tends to lead too.

Which is fine, so long as the songs can back it up. Which as we’ve mentioned, they most certainlyseem too. But it could yet be a problem, it could yet make White Lies a band to admire, rather thanlove.