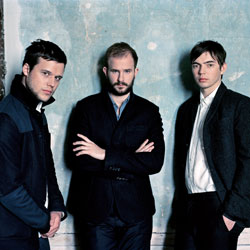 Two weeks after the release of second album Ritual, White Lies kicked off their UK tour in the intimate surroundings of the Cambridge Junction. For a band that held their own in front of the Muse faithful at Wembley, this comparatively tiny auditorium could be seen as a come-down. However, the intimate black box of a venue magnified a faithful mass, eager to hear how the new record translated to the stage. They weren’t to be disappointed.

Support act Crocodiles really made a splash as the second billing. Oozing indifference and throwbacks to ’60s cool; the often-anthemic choruses stirred the previously-lethargic audience. Perhaps that’s to be expected of a band whose most recent offering was produced by James Ford, of Simian Mobile Disco fame. Neon Jesus was a particular highlight, with line after heartfelt line rolling one into the next. While the sound levels were far from perfect, Crocodiles gave a great account of themselves, winning more than a few new fans.

Afterwards, the anticipation was palpable. White Lies capitalised, taking no prisoners with a rip-roaring set, totally unafraid to apparently exhaust their hits, only to prove that they’d have more in the tank later in the show. Kicking things off was Holy Ghost. Unfamiliar to anyone who hadn’t got hold of the album in the fortnight prior to the gig, this massive tune certainly whetted the crowd’s appetite. They boldly followed it with To Lose My Life. Front man Harry McVeigh grew into the familiar regularity of Charles Cave’s bass and Jack Lawrence-Brown’s drums, playing fast-and-loose with the lyrical tempo without distorting the anthem the fans knew and loved. What’s more, the sheer goodwill by going so huge so soon powered the band through their less well-known album material.

Predictably, their older stuff got a bigger reaction, but that’s not to say that the new material didn’t make an impact. The beautiful synth line of Strangers couldn’t help but carry the crowd, while Lawrence-Brown’s tight cymbal-work on The Power And The Glory kept things slick, McVeigh holding his hand out towards the audience, prophet-like. Well-designed up-lighting gave the band that haunting allure they were lacking at Wembley, as did a sound that filled the intimate space without drowning anything out.

Even the airing of Ritual’s opener, Is Love, came off, despite being the track which most markedly partitioned the crowd into those who knew the new album and those who didn’t. The harmonies worked beautifully, in terms of both synchronisation and balance, and the crowd were receptive to whatever was thrown at them. Death was whipped out before the encore to send the mood stratospheric.

Unfinished Business kicked off the encore, with its sing-along chorus and ability to whip a crowd into euphoria despite (or because of?) the morbidity of the lyrics. The curtain fell on a stirring rendition of brand new single Bigger Than Us, confirming that second album syndrome wouldn’t be an issue for the Ealing outfit.

While not the most mobile band on stage, the Junction’s atmospheric lighting, tightly-huddled crowd and carefully-balanced sound suited White Lies down to the ground. Who needs to run around the stage like a maniac when you can pull in the audience with the haunting quality of your voice? The band were captivating and commanding in equal measure, and this promises to be an excellent tour.