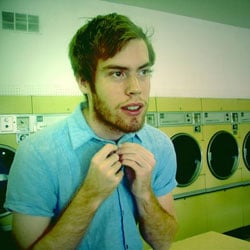 Looking at the sparse, parted crowd attending tonight’s gig, you assume that a substantial amount of Wild Nothing‘s demographic audience have buggered off elsewhere. Shoreditch, to be precise. The 1234 festival, a buzz-band congregation, is a one day-event you’d have expected to see Jack Tatum and co billed for. And it clashes with tonight’s proceedings.

That’s the only means for justifying how poor the turn-out is when you consider the impact debut album, Gemini, has had over the year. Its textural, dream-pop delights have led to it becoming one of the few releases truly benefiting from an excitable, word-of-mouth buzz.

Tatum’s rise from bedroom songwriter to sought-after artist with an album to his name has been typically speedy, comparable to the rate at which Surfer Blood and Best Coast sprang to success : one good song, one important blog singing your praises and you’ve got a masterplan to implement. That “one song” of Tatum’s was Summer Holiday; a gorgeous, sweeping nod to The Pains Of Being Pure At Heart. Not one of a kind, but enough to convince people that he’s something special.

Summer Holiday is disposed of three songs in, and receives the highest quantity of respectable head-bops from the largely static audience. Tatum’s vocals which on record are drenched in reverb and more a component to the song than a vital centrepiece, meet nothing in terms of effects, here. And although his voice is noticeably commanding and undoubtedly able to hold its own, you get far less of the nostalgia and the drama that blows you away on record.

The live band’s sound as a whole fails to replicate the textural, dreamy atmospherics of Gemini and although each member does his best to add energy into the lifeless crowd by jolting their respective instruments and looking ready to pounce, the results are largely unsatisfactory.

Set opener Chinatown all but blows us away with its beautiful blend of inventive percussion and light keyboards patterns and is a noticeable highlight. But much of the set, particularly when the pace is skewed and taken down a notch, fails to muster up the hazy, infectious escapism spread across a debut album that announces Tatum as a genuine man of ideas. Tonight’s gig doesn’t dispel this idea; the talent is merely still emerging from the clouds and will only progress.

Wild Nothing MP3s or CDs

Wild Nothing on Spotify