by Michael Cragg
published: 15 May 2010 in Live Music Reviews
Tweet 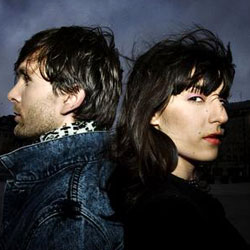 The Bishopsgate Institute was built in 1895 in order to help promote the advancement of the fine arts. Situated opposite Liverpool Street Station, on the edge of the City, its terracotta facade is a wonderfully anachronistic sight amongst the shiny glass of modern office blocks.

Inside, Swedish husband and wife duo Wildbirds & Peacedrums are proving why they stand out in a music industry reliant on studio wizardry and modern technology.

Considering the simplicity of their set-up – Andreas Werliin plays drums and percussion, whilst Mariam Wallentin plays steel drums and sings – the cacophony of noise the pair make is breathtaking. Whilst their previous gigs have been almost ferocious in their focused intensity, tonight they’re joined by an Icelandic choir to perform 10 new songs taken from two EPs; the recently released Retina and the forthcoming Iris.

The inclusion of the choir adds a whole new dimension to the dynamic of the couple, with Mariam’s attention switching every now and then away from her husband and onto the choir. It also adds a melodic sensibility that can sometimes be missing from their music, with the choir adding layers and extra dimensions to the sound. This is especially apparent on the stand-out tracks from Retina, with the young singers delivering breathtaking vocal flourishes on Fight For Me and sinister atmosphere to the dark, claustrophobic Bleed Like There Was No Other Flood.

Though the choir adds much, attention is still drawn to the pair at the front. Mariam is a ball of nervous energy, swaying constantly from side to side or stamping her bare feet on the wooden stage. There are moments when she seems to be playing three or four instruments at once (at one point she plays a keyboard with her feet) and all this whilst unleashing that pained howl of hers. Andreas, though sat down throughout, is similarly engaging, teasing sounds out of his drum kit that seem almost miraculous.

Despite the fact that much of the material is brand new (though a few older songs are included but rearranged with the choir), the small crowd are transfixed. Tracks like Tiny Holes In This World and The Wave are met with almighty cheers that threaten to shake the building to its foundations. As the final notes of the closing Peeling Off The Layers reverberate around the hall the sheer force of the crowd’s response visibly shocks the band, who are caroused into two encores, the latter of which is clearly a spontaneous reaction to that fact that no-one’s willing to leave.

But it’s during the first encore that the gig’s perfection is cemented. During the seven minute long run through of fan favourite My Heart, Mariam steps away from her mic and begins to sing the song’s refrain completely unamplified. Standing on the edge of the stage and leaning towards the crowd she clutches her chest and sings “Don’t run/ You see I’m lost without your rhythm”, and the more she repeats it, the more people join in. It’s a moment of strange magic that turns a song about the love between a husband and wife into a religious celebration.