A Winged Victory For The Sullen @ Barbican, London 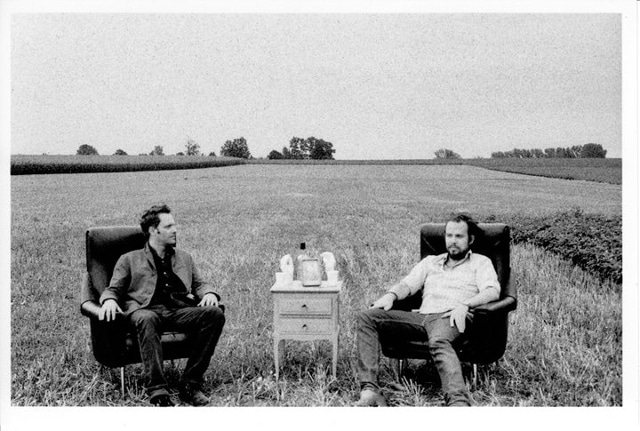 A Winged Victory For The Sullen

It’s been a remarkable year for the (so-called) neo-classical music scene: Ólafur Arnalds toured his Broadchurch soundtrack, exposing him to a wider audience; Nils Frahm and A Winged Victory For The Sullen played a much lauded show at the BBC Proms and the year has come to an end with the release of Lubomyr Melnyk’s much praised Rivers and Streams.

While this type of music has by no means entered the mainstream, there is a sense that its purchase has grown. So it feels somewhat fitting that AWVFTS should see out the year with a valedictory show – essentially a repeat of their Proms performance – at the cavernous Barbican Hall. And what a beautiful show it is, in every respect.

The Barbican Hall holds just shy of 2000 bodies, but despite its size has an inherent warmth for which AWVFTS’ music is more than a match. The multi-instrumentalists Dustin O’Halloran and Adam Wiltzie are joined, as at the Albert Hall, by a string trio and members of London Brass. Between them, they create a sumptuous soundscape that matches the breadth of 2014’s Atomos.

Although each musician is undoubtedly a master of their instrument, there is not one moment of soloist grandstanding. Instead, it’s a seamless symbiosis of individuals lending their talent sensitively to these compositions. The BBC described their Proms performance as an exploration of “the borderlands of classical music”, and this idea is most beautifully realised on Atomos VII. The trio’s strings harmonise flawlessly with the synthesised backdrop, generating a composition of almost unbearable yearning, the traditional tools of the classical world meeting with those of electronic ambient music to great effect.

The apparent rise of the type of music that AWVFTS produce is curious in itself. In a time where everything is tweeted, vined or gif-ed into bite sized, easily digestible nuggets it’s mildly surprising that sprawling instrumental chamber music should be finding a refreshingly young audience. Watching AWVFTS, however, it becomes clear that, despite the abundance of instantly gratifying music, theirs is all the more satisfying because it asks more of its listener. For every well placed and thought-out nuance of guitar feedback or electronic static, there’s space enough left for the audience to contemplate it. As in the recent film Carol, or indeed its forebear, Brief Encounter, the magic lies in the mystery created by not exposing everything, leaving much to the imagination. With tracks like Atomos VIII they build the string section, but never to an absolute crescendo, revealing just enough to keep you wanting: offering no obvious cheap emotional pay-off only makes for a more moving experience.

It would be remiss not to mention the lighting for this show – Adam Wiltzie was reminded during his ‘thank-you’s to do just that by an audience member, and quite right too. The lighting is a character in its own right, elevating the evening from mere recital to fully fledged show. Bright white spots beam out from behind the musicians and land on the audience as speckles; incandescent strips of light like the dying embers of a fire warm the back of the stage, the effects beautifully realised and complimentary.

The performance satisfies a great deal of what you might want from a gig, by turns both epic and intimate. It might be easy to explain away their music as experimental but this is no mere intellectual exercise; rather, it’s the perfect blend of thought and feeling. It’s with a heavy heart that the audience shuffle out of the Barbican Hall – left wanting, but in the best possible way. If A Winged Victory For The Sullen do reside on the borderlands of classical music, it’s about time they were brought in from the cold.