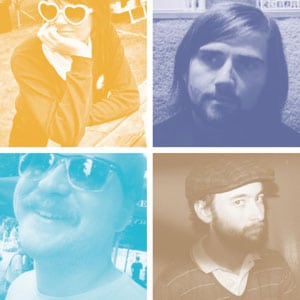 It’s been a golden few years for indiepop, a genre that didn’t so much vanish with the bands that appeared on the NME’s infamous C86 tape, but rather plodded along, appealing to a small but devoted, cultish following. But the likes of Allo Darlin’, Veronica Falls, Crystal Stilts and Wave Pictures have cast indiepop’s net a little wider, reeling in wider audiences.

Fortuna POP! is the label leading the way – pumping time and money into bands at a rate rarely seen elsewhere. The Fortuna POP! label is a like a hallmark – a stamp of quality almost guaranteed, which might explain why much of their annual showcase, Winter Sprinter, is sold out. Over four nights, some of their biggest signings and brightest hopes for 2013 called into the Lexington, from current kings and queens of twee, Allo Darlin’ and old favourites Milky Wimpshake to brand new bands promoting their first 7”.

It’s these fresh faced bands who stole the show(s). The recently announced demise of favourites Standard Fare and Shrag (who both released albums that were greedily and gleefully gobbled up by indiepop fans last year) sent shockwaves through the community. As two of the biggest bands of the scene, and they’ll leave a gaping hole. Or will they…

The Spook School, who kick off the first show, alone have enough energy and enthusiasm to fill that hole. Swaying towards The Vaselines‘ end of the spectrum, the Edinburgh band are cheap n cheerful, spinning lo-fi fuzz around bouncey, upbeat pop. The post-Standard Fare/Shrag world seems more bearable already. Likewise, the brilliantly named Joanna Gruesome, a noise pop five-piece who thrive on girl-boy melodies while spitting out punk retorts, prove there’s life in the scene yet.

Thursday’s opening band, Haiku Salut, are another prospect entirely. The Derbyshire trio are due to release their debut album on the recently resurrected How Does It Feel To Be Loved in March, and woo the crowd with their high concept instrumental set, which manages to merge woozing folk, dubstep and classical sensibilities. It’s what Gold Panda, Devotchka and Yann Tiersen would sound like if they were all thrown together. Elsewhere, Evans The Death are slightly better known than those they share the opening slot with, having released their acclaimed debut album last year. Their last appearance at the Lexington, supporting Let’s Wrestle, was somewhat dry and lacking in any pizzazz, but tonight they’re back on form, singer Katherine Whitaker growling her way through the grungey, post-britpop of Telling Lies, Wet Blanket and Threads.

The youngsters shone so brightly they cast a shadow over the bands they loitered around to see play afterwards. Tender Trap sounded flat and safe; Darren Hayman, while clearly adored by the sell-out crowd, has long played a safe game; and the magnificent, 20-year-old Comet Gain, again a band held dearly by fans, relied largely on nostalgia, with old favourite Fists in the Pocket causing something verging on a moshpit. It’s Shrag’s penultimate gig and they seem to be winding down already – the wild, riot grrrl-ish anger and yelps toned down, the electric, fizzing gigs of yore already a distant memory. Herman Dune play a warm set, the highlight of which is a remarkably French sounding cover of the Velvet Underground’s Pale Blue Eyes.

But it’s not all bad news for the older bands. Nearly 20 years after they released their first tape, Milky Wimpshake are about to unveil their fifth album. A few oldies are thrown in, but the Geordies are determined to prove they’ve not lost their knack for carving nuggets of simple, kitchen sink silliness. The new tracks shine – an enticing glimpse of what to expect from Heart And Soul In The Milky Way. Withered Hand – aka Dan Willson – is also a master of the silly song, with lyrics that send chuckles rippling through the room. His blend of DIY thrash-folk could be easily dismissed if it weren’t for his spine tingling voice. Playing a solo set, with just him and his guitar, much of his most recent album was off limits, and he visibly relaxed when joined on vocals duties by Pam Berry of Black Tambourine who, he tells us, he befriended over Twitter.

But Winter Sprinter is Allo Darlin’s turf. It was a slow start, with singer Elizabeth Morris explaining that she’s just got back from Australia. “It’s been a pretty shitty month,” she admits. She seems sad, as she throws herself into a set comprising two albums worth of sentimental songs – part upbeat, part reflective. From their self titled debut, we get Polaroid Song, Dreaming, Silver Dollars and Kiss Your Lips, and Morris paints pictures of old friends sitting around campfires, trekking through the city in the frost and nights that go on forever.

But it’s last year’s Europe that really packs a punch tonight. A more reflective record, it was less about dancing and more about pondering the bigger questions in life. Whatever it is that’s upset Morris, she bravely channels it into the set, looking visibly teary throughout. It shows the breadth indiepop can reach; it’s not all about dance-floor fillers. A lesson the whippersnappers biting at their ankles would be wise to take on board.