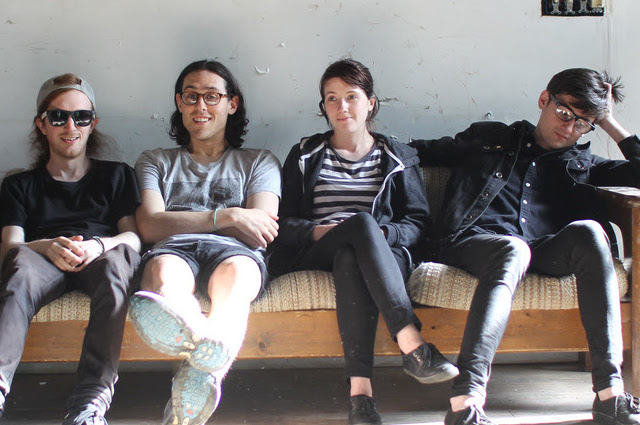 Legendary indiepop label Fortuna Pop!’s annual showcase has become a key date in the scene’s calendar. Now in its sixth outing, Winter Sprinter sees 12 bands from the label’s roster take over The Lexington for four nights in the first week of the year. Its timing is apt, as it’s not only a celebration of the label’s back catalogue, but also what we can expect over the next 12 months.

Undoubtedly the most anticipated new music will come from Tigercats, whose last album, released almost a year ago, saw them take a significant departure from the hyper-twee of their debut. A more intense, introspective sound, Mysteries was one of those albums that drags you in, forcing you to investigate hidden layer upon layer. It was a darker, moodier, more sophisticated sound for a band better known for singing about dancing around Dalston. So the new tracks aired during their headlining slot on the Wednesday, were a genuine surprise. A more polished sound, with lashings of disco, their new songs won a rare honour; they were as well received as the fan favourites. However the highlight came in the form of Sleeping In The Back Seat, a joyous duet, which saw them joined (for approximately four notes) by Darren Hayman on sax.

That collaboration was far from unique; throughout the week fellow signings and scene pals can be seen watching their label mates and this camaraderie is at its peak with Friday night openers Bleurgh, a Blur covers band featuring members of Fever Dream, Allo Darlin’, Tigercats and Night Flowers.

The label’s babies, relative newcomers Chorus Girl, only released their debut album at the end of last year, but they already sound like old hands. A reminder that Fortuna Pop! is not just about jingling guitars and C86, they look to Lush and The Breeders for inspiration. Singer Silvi Wersing is a dream of a lead singer; a shock of cropped blonde hair and an icy attitude, she’s achingly cool, leading the band as they run the gauntlet of emotions to a soundtrack of heavy choruses and pop-noir. Dream On Baby Blue and single Oh, To Be A Defector are near-perfect twisted pop songs, which nestle in your head for days.

Now a regular at this shindig, Withered Hand – aka Scottish folk troubadour Dan Wilson – is well at home and, despite his slightly awkward stage manner, has the audience lapping up his hilarious stage chatter. Religious Songs and Black Tambourine are warm, confessional, life affirming…like a long night out with an old friend. He’s a delight to watch.

Flowers‘ C86-infused woozy sound has created quite a buzz, and their first couple of songs on the Wednesday woo the crowd with singer Rachel Kenedy’s sweet, trilling, high pitch. It’s a gorgeous sound, which recalls Elizabeth Fraser, but after those opening two songs, well…it just sounds the same. They’ve got everything they need in theory; masterly guitar tricks, that voice…they’re just missing that vital ingredient – songs. Milky Wimpshake’s Pete Dale is aware that his band, too, could be accused of sounding the same. “We do always sound the same…if you don’t like it, leave,” he jokes. The difference here, is that Dale’s got wonky pop tunes spilling from his every pore.

They should have been at a disadvantage tonight; having had their drummer call in sick, they’re at their mercy of a former drummer, who hadn’t played their newer tracks until a couple of hours ago during their sound check. However, Dale is such a dominant frontman that they could probably have done without a drummer at all. They dip into their back catalogue, spanning some 20 years, each song as youthful and lusty as the last.  They’re the perfect warm-up for Martha, a band Dale admits to being a huge fan of, as his dancing at the side of stage confirms.

Every Martha show feels victorious; a two fingered salute to growing up and normality, and tonight was no exception. They too are preparing for a new album, although that might be on hold seeing as their studio, Suburban Home, in Leeds, was flooded on boxing day (a fundraiser has already raised £10,000 to help get it back on its feet – you can donate here.)  With the help of the anthemic Sycamore, the gutsy Bubble In My Bloodstream and the heart wrenching Six Men Getting Sick Six Times (Mendable), their fan base  has expanded far beyond the usual Fortuna Pop! crowd; down at the front, punk kids with giant rucksacks elbow for space with middle aged guys in Hefner tshirts. With previous records telling tales of school life and teenage romance, it’s going to be exciting to hear where go next, but the handful of tracks previewed tonight suggest they won’t be moving too far away from the pop punk that’s become their signature. It’s an exhilarating end to fantastic week of shows from one of the county’s most consistent labels.