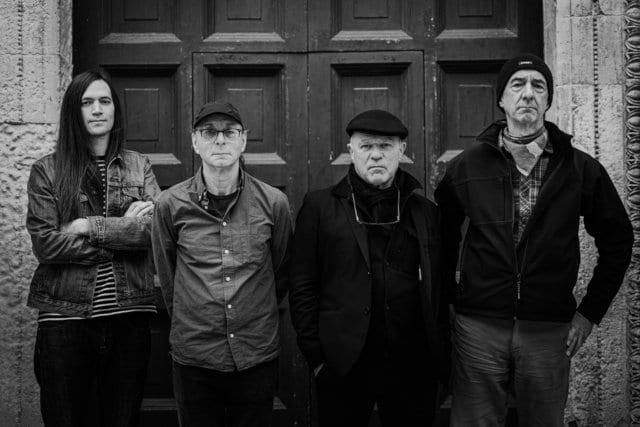 Wire have always been semi-unwilling participants in the circuitous narrative of rock history. Dispensing with the extraneous flourishes of the then prevalent progressive and jazz rock scenes, they initially offered an abrasive and succinct alternative, with discordant clipped melodies, courtesy of bassist Graham Lewis and drummer Robert Grey, topped with opaque lyrics from Colin Newman that critiqued the dynamics of interpersonal relations and socio-political mores.

Their intention at the time was to deliver new methods of communication that reflected the current status quo. That mirroring was essential to their ethos. But times have changed. Yes, they have a brilliant new album Mind Hive to promote, but there’s an air of doubt that fogs proceedings. Have they over the last few years become what they always rallied against? Are they now formulaic? It’s a question that the band tonight seemed willing to address.

It’s testament to the group’s dynamic that so many of the original members are still active within the unit, still able to communicate and collaborate. In four decades they’ve only lost one member and gained another. They reflect one another visually and vocally onstage, with Lewis being the thuggish cheeky eccentric and Newman the arch sophisticate.

Opening with The Offer from 1988’s It’s Beginning To And Back Again, a prickly ballad that sounds too much like it’s trying to be New Order, they seem disengaged. Thankfully they follow it with the aggressive newie Be Like Them that brings them back into focus. In an effort to minimise on nostalgia or distraction the melody, with its hints of Orientalism, rages against the dystopian now, and the lyrical content states the author’s irritation, rabidity and feral mind. Its chorus line rants that “insomnia dogs me in this tired year” and it’s that irked nature that makes it a classic within the Newman canon. The group can write love songs easily enough but it’s that ever challenging, eternally questioning tone that made them stand out from their peers.

They play A Question Of Degree, their immortal 1979 single, and it functions on a similar principle. Built around an economical usage of guitar and drums, its refrain of “oohs” are intended to antagonize the listener, and it threatens and taunts before dissolving into submission. On Cactused, also from their new album, the tune contains all the standard elements that have always defined the appeal of Newman’s songwriting. Non-sequiturs rub up against each other. Language takes precedent of course, but the riff, whilst pleasing enough to listen to, hangs around too long, becomes obvious, and turns out to be unnecessary ornamentation. Ironically the song speaks of being well versed in choruses and verses.

Similar feelings are conjured listening to Hung, a seemingly endless alarm call about the loss of trust. It seems the damage has been done. The band is aware of the weight of anticipation that hangs around their neck. As the set reaches a climax, we get a lot of older numbers, such as French Film Blurred and the obligatory Ex Lion Tamer and Outdoor Miner that placate the crowd, but it seems to be a chore for the band to perform them. They don’t seem thrilled to look backwards but at the same time, are afraid to commit to playing only new works.

The night draws to a close with a clamorous take on A Touching Display, an older song that always seemed reminiscent of Roxy Music. Instilled with the same glamour and hints of danger you’d freely associate with that band, its narrator intones a monologue filled with self-doubt and perplexity. As we make our way out of the cavernous hall, the consensus is that we can’t help but feel those same emotions.