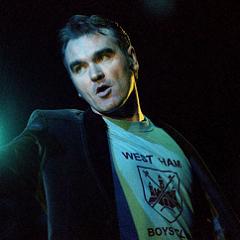 The Wireless festival produced a second day line-up capable of giving any event a run for its money, the formidable solo talents of Beck and Morrissey given top billing on the main stage.

In reality there were light years between the two behemoths and their support acts, with a rather lacklustre performance from Dirty Pretty Things followed by the unsubtle bluster of The Wombats, who’ve been hollering about Moving To New York at any possible festival opportunity.

The appearance of Beck put them firmly in their place, and within seconds of Devil’s Haircut it was clear Mr Hansen was keen to give us value for money. With Hyde Park’s strict curfew even unsettling Pink Floyd at Live 8 three years back, he was mindful with a minimum of chat allowing him to motor through the songs.

Black was the colour, a natty suit and hat combination with just a touch of red peeping through. The music was just as smart, and while the festival crowd lapped up the Odelay singles, with New Pollution a big hit despite an invisible saxophonist, the dreamy psychedelia of Chemtrails made an understated impact.

A focused performance from the band brought a slightly perfunctory Last Night A Girl, but the slack groove of Loser was, as ever, a pleasure. Numbers from the new album Modern Guilt fared well in the outdoorsand were weirdly uplifting.

Meanwhile The National played to an adoring audience in the SanDisk tent, demonstrating a continued live development that finds them performing with even greater intensity than the Alligator tour three years back. Matt Berenger continues to play the role of tortured front man, breaking considerable emotional sweat as he dug deep for Music, and its vocal “I’m so sorry for everything”, before a final Mr November fair blew everyone’s socks off with its musical power.

Returning to the main stage it was time for the king of Manchester, and Morrissey immediately made his point. “When you walk through a storm, hold your head up high”, he proclaimed before launching into The Last Of The International Playboys. Beginning in a Playboy T-shirt, he was soon bearing the American Idol logo, then a long sleeved shirt, and then, customarily, nothing at all as he left to shouts of adulation.

It was soon clear that Morrissey tonight was positively beaming inside, a fact only occasionally betrayed to the audience in a half smile or a clenched fist. Observing the curfew, he noted that his penalty for not doing so might be “a fight between me, Ruth Kelly and Harriet Harman onstage – and nobody wants to see that!”

So instead he got on with the business of making his music connect with a rapturous audience, with the occasional sideswipe at Kylie Minogue or George Bush. While the crowd were relatively quiet during Mama Lays Softly On The River Bed and That’s How People Grow Old, there was still a quiet concentration as he sang, the tightness of the band lending even these new songs a particular intensity.

The gong came out again, supplemented by an even bigger drum for Life Is A Pigsty, which paved the way for first encore What She Said. Throughout Morrissey gave a passionate, heartfelt performance, none more so than when rising, Phoenix-like, for How Soon Is Now, sung exultantly from front to back. Darkness had fallen, but his light was still burning brightly.