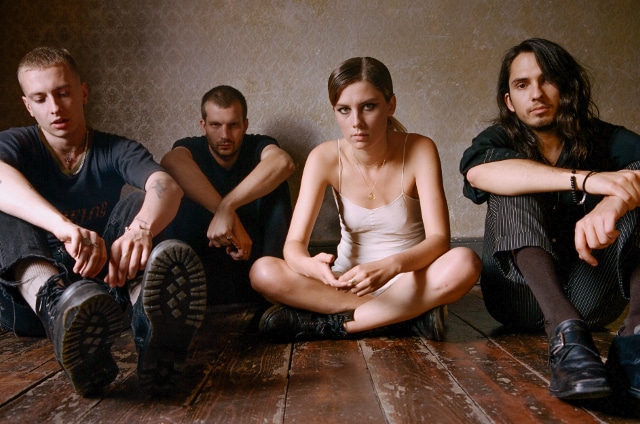 Wolf Alice are clearly very happy to be here. Ellie Rowsell makes it obvious from the off, shrieking “Londooon!” as the four-piece step out onto the Alexandra Palace stage, looming over their North London home turf. Bassist Theo Ellis, too, is obviously loving every minute, variously exclaiming “this is fucking mental”; challenging the audience to get a beer to him all the way from the bar at the back of the venue by the end of the set – which they do – and throwing in a shout-out to “nan”, perched on the viewing platform behind us.

But if anything, the 10,000 or so who’ve made the slow 1°C trudge up here tonight are even happier, and the joy that greets the furious, grungy salvo of Yuk Foo and You’re A Germ – after the fittingly grandiose and stargazing Loveless-isms of the opening Heavenward – barely lets up.

As the afternoons shorten and the mercury plummets, Albums of the Year season is upon us, and September’s Visions Of A Life already appears to be featuring heavily. Deservedly so. 2015’s My Love Is Cool lived up to advance hype far better than a lot of comparably heralded debuts. But the follow-up managed to explore wildly varied territory – the eight-minute closing title track, a punishing epic here, or the buoyant, funky Beautifully Unconventional (dedicated by Rowsell tonight to Hannah, “my tiny friend” who inspired the song) – while retaining the urgency and awkward emotion, the heartfelt noise of early highlights Lisbon and Bros.

They play nearly all of Visions… here, and it’s not just the singles that come over well: the understated Planet Hunter searches and swoops, Sadboy shrugs off the shuffling acoustics for glowering gothpop and a version of St. Purple and Green which sees Rowsell and guitarist (and occasional keyboard player) Joff Oddie flit between featherlight, folky verses and a soupy, blustering refrain which fills the cavernous hall. On top of it all, there’s Rowsell’s voice, switching in moments from Heavenward’s swooning and ethereal tones, to the breathy near-rap of Don’t Delete The Kisses or the KatieJane Garside/Kathleen Hanna-esque howling of Yuk Foo.

In a show full of them, perhaps the most joyous moment sees the band invite 15-year old fan Jade – discovered after a call-out on Twitter – up on stage to add (note-perfect) guitar to Moaning Lisa Smile. “We asked her ‘Have you ever played in front of anyone before?’”, says Rowsell; “she said ‘nah’, so we chose her.” Ellis ends the night by saying playing here “was a dream come true”. The feeling, for one fan and for 9,999 others, appears to be mutual.