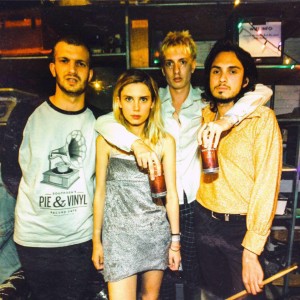 North London indie quartet Wolf Alice come south of the river for their last gig in Britain before heading off next week for a month-long tour of North America. It’s a pretty hectic schedule for the band these days. They’ve already played the big festivals here this summer, then after they get back from the States they have a European tour stretching into February. This reflects how much their fan base has expanded since their release of two EPs, followed by their critically acclaimed debut album My Love Is Cool in June this year. Selling out to a 5,000-capacity venue like Brixton Academy is par for the course now.

Ranging from introverted to wild, Wolf Alice’s music is a sort of post-grunge shoegazing, drenched in reverb, which gives the band an interestingly layered, off-kilter sound that has clout behind it to stop it drifting away. You can also still sometimes hear their folk-pop roots from when lead singer Ellie Rowsell and lead guitarist Joff Oddie formed the band in 2010, before the rhythm section of bassist Theo Ellis and drummer Joel Amey joined up to give the band a more punchy rock backbeat.

In their one-hour set they put on a shimmering performance for an appreciate audience. The stage backdrop displays the album cover artwork of a hazy figure half-covered in glitter as well as what looks like a starry night sky which explodes into light during the more raucous numbers, when the band and the crowd thrash together.

Blonde-haired Rowsell, dressed in a tightly clinging black outfit and DMs with glitter on her forehead cuts a striking figure, shifting between cool detachment and occasional raunchy head-banging, her normally dreamily melodic voice interjected by bouts of screaming abandon. Oddie makes the most of effects pedals as well as occasionally twiddling with the keyboards, while the glammed-up Ellis moves around the most, jumping on the drum kit with what seems to be spontaneous enthusiasm rather than just going through the rock-cliché motions.

Songs like the playfully stop-start Your Love’s Whore, the sweetly melodious Bros and the beautifully haunting Swallowtail (for which Amey takes lead vocals) come across well, even if some of their subtlety is lost in the auditorium. But Wolf Alice can ramp up the amps when they want to as shown in grungy first hit single Fluffy, high-energy blast You’re A Germ, the alternating hot/cold She (from first EP Blush) and the soaring guitar lines of Moaning Lisa Smile (from second EP Creature Songs). Returning to the stage for three encores, they finish on a high with the album’s riff-heavy lead single Giant Peach.

After being blasted with metallic gold and silver confetti, the audience emerge from the building into the night with a bit of glitter in their hair and a lot more in their hearts.