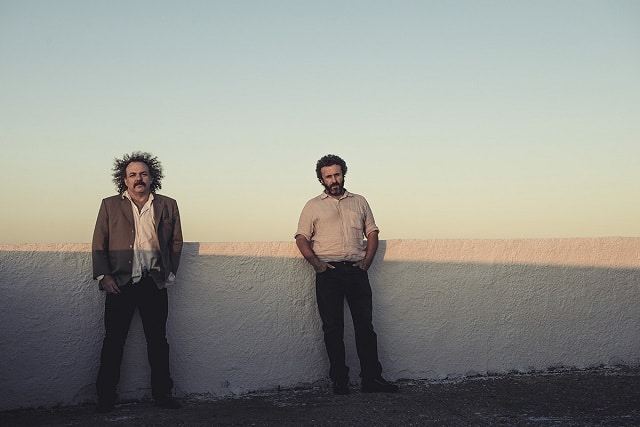 The first month of this new decade is nearly over, and with it comes an ominous period of weighty national change and emotional loss. That so many of us native little islanders are currently sat in hushed reverence to a cheeky Antipodean/Cretan duo who play somewhat maudlin experimental Mediterranean folk songs is not lost on Giorgos Xylouris and percussionist Jim White. The cold bracing sea winds can’t reach us in the curtained basement of the Komedia and we huddle close to the stage to make them feel as welcome and loved as they do to us. Each Xylouris White performance is a life-affirming spectacle that runs through a gamut of emotions, from ennui to anarchy.

If you’ve not heard of them, you’re in for a treat. Jim White, possibly the better known of the duo, has spent the last three decades playing with the mighty Dirty Three, as well as collaborating with Cat Power, circa her last true masterpiece Moon Pix, PJ Harvey, White Magic and Marianne Faithfull on her underappreciated covers record Easy Come, Easy Go. That album title is a rather apt description of White, as he exudes a natural allure and focus that must surely appeal to his collaborators.

Xylouris is playing a laouto, a string instrument similar to the lute from his native Crete. Giorgos, whose nickname is Psarogiorgis, is not the only famous Xylouris in the music business. His father Antonis is a famous lyre player in his own right, and his late uncle Nikos was also a musician and composer. This heritage has forged Psaragiorgis into a player of quiet force and brilliance.

They’re in town to perform songs from their most recent album The Sisypheans, which came out last year on Drag City. The album’s rough theme is a subversion of the Sisyphean task. Rather than seeing the eternal repetition as a relentless and futile struggle, they choose to frame it where the titular character gets to experience each day anew, taking in fresh sights, sounds and senses. Choosing optimism rather than nihilism is a defiant choice, and surely in these dystopian days, there’s something to be said for assuming that romantic attitude.

They’re playing the album in full tonight as they have done at recent shows. It begins with Tree Song, with its simple plucked intro easing us into their world. As we began to appreciate the laouto’s gentle electric tones, White begins to pitter-patter across various surfaces with sticks, pads and other objects. There doesn’t seem to be a structure at first, the song segues into another and then a third, and then they come to Telephone Song. Announcing its arrival is enough to get the front tables to stand and move to the side so they can dance, in dervish ecstasy. People stand on chairs to watch as they whip up a musical dust cloud that hums and jolts us from our senses.

Afterwards they play Inland and again it pummels and delights all. They crack jokes early on about being too chatty but it’s all part of the attraction. After they’ve played all eight tracks from the album, stretched out and expanded to full potential, they treat us to a selection from their back catalogue and we lap it up eagerly. The pair have an innate ability to make listeners feel part of a family, a community through their playfulness and their respect for the traditions they’re upholding. Their grace, humour and love radiates outwards to all present and makes us all willing to keep pushing ever upwards, ready to face a brighter tomorrow.