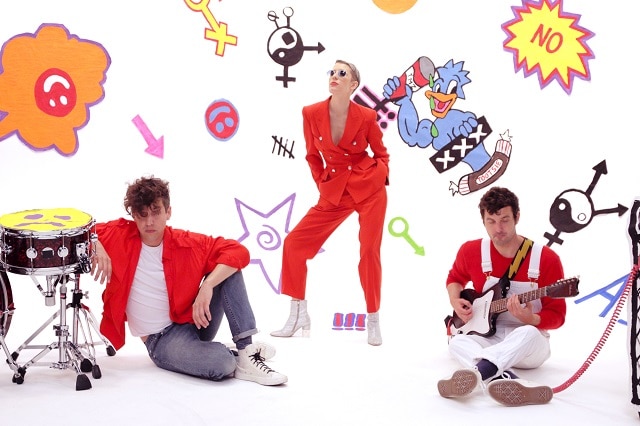 Not deterred by the approaching ravages of Storm Dennis, people slowly begin to bundle into the dim recesses of the cavernous Green Door Store, ready to catch another performance by Californian dance punkers YACHT. As coats come off, beer glasses begin to clink and folk chatter, the room suddenly goes quiet and an ominous female voice sings a short folky ballad, reminiscent of Isla Cameron’s O Willow Waly from the cult 1960s horror film The Innocents. It’s disconcerting and anachronistic for what’s about to follow, as the trio aren’t here to spook us. Instead they’re about to get brains whirring and even the stiffest of bodies dancing unreservedly.

YACHT are here to promote Chain Tripping, their most recent album for which they returned to the DFA fold. To aid the creative process the group took inspiration from the ‘cut up’ technique, beloved of musicians like David Bowie and authors like William Burroughs and Kathy Acker. Ostensibly the group is a duo of Jona Bechtolt and his partner Claire L Evans, with the former providing beats and guitar and the latter as front person. Tonight on tour they’re joined by Bobby Birdman, on bass and various electronics.

That they’ve been inspired by a primarily literary technique is immediately evident. Evans, with her theatrical gesticulations, acts as a form of narrator for the multimedia events. Strange sentences flash up on the wall behind her. Furthermore, her audience actions and fourth wall antics are distinctly Brechtian in nature, and the show is even divided into three acts; embracing the new record, then some older hits, and not an encore as such but more a parting couple of numbers including their undisputed smash Psychic City.

It takes a couple of songs to get accustomed to how emboldened Evans is on stage. She jumps into the crowd and makes a point of, in her own words, irritating everyoned. But she’s no irritant at all. Her shirt is emboldened with the legend ‘Phone Home’ on it, but she is not phoning this one in. She is raptured with the room and the crowd loves her right back. They dance unrepentantly and swoon and smile when she comes near them.  As an emcee and performer, she is pure dynamite, contagious in a considered yet naïve way. It helps that Birdman is throwing her some intensely funky bass lines to underpin her lyrics and that Bechtolt is hammering away at that blessed DFA requisite, the lowly cowbell.

The numbers from Chain Tripping, which for some reason they seem to be playing in reverse order, run the gamut from dancefloor classics such as (Downtown) Dancing and the Remain In Light-esque Blue On Blue. There is even a tribute to their home state on the exotica tinged California Deli and a track called Death, that paradoxically makes us all feel alive. The Talking Heads link is also apparent when the band interact with the visuals. It feels rehearsed and theatrical but in a smart digital postmodern way, the visuals seem to be lip-syncing to the live band rather than the other way around.

When they get to the hits section, playing I Thought The Future Would Be Cooler and Hologram, the room has decided to shed all inhibitions and is now truly cutting some rug. Smaller dance floors are forming within the existing dance floor. There’s a curfew in place and the band knows they don’t have much time left so they offer to stretch out the finale, and it’s a cantankerous Psychic City. The crowd sings along to the chorus’s melodic shout outs enthusiastically and the band, now jubilant, says their goodbyes and offer to hang out and chat with willing folk all night. It’s wet and miserable outside so we stay behind. While the future may not be all that hip, the present is pretty astonishing.