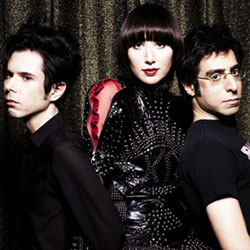 For many, 2009 has been the Year of the Synth. Lady Gaga has risen from nowhere to be almost omnipresent, La Roux has brought a touch of ’80s androgyny back into the charts and, perhaps most surprisingly of all, Yeah Yeah Yeahs have ‘gone disco’.

Yes, despite having the man who could arguably be called the best guitarist of his generation in their ranks, the New York trio’s latest album saw Nick Zinner mainly on keyboard duties. It was a bit of a jarring experience to some, but It’s Blitz! has become their most successful record to date.

So there was something of a celebratory feel to this tour, with glitter and tinsel festooned on the stage and a giant eye swivelling round in comic fashion at the back of the stage. Yet with a Yeah Yeah Yeahs gig, all eyes are on just one person – Karen O.

Clad in a multi-coloured tasselled smock, O’s frenetic kinetic energy meant that she was inevitably the centre of attention. Whether it’s throwing rock star shapes, trawling the front row in search of backing vocalists or simply bouncing up and down with a big grin on her face, she’s every inch the quintessential frontwoman.

Yet it’s the chemistry between the trio that make them such a special proposition live – with Zinner effortlessly swapping between keyboards and guitars and Brian Chase battering away at his drums like a thing possessed, it’s incredible to think that so much noise can be made by three people.

Bouncing on stage and tearing into Dull Life was an exciting enough start, but it was the way they ripped through the 15 song setlist with barely a pause for breath that was most impressive.

Evenly divided between the three albums (with the odd surprise like Rockers To Swallow thrown in), it was a demonstration of how strong the Yeah Yeah Yeahs’ back catalogue is. Early classics such as Pin and Black Tongue stood side by side with more commercial moments like the glorious Zero – one of the night’s pure singalong moments, with Karen O conducting the crowd dressed in a mightily studded leather jacket.

Skeletons was a particular highlight, featuring O with a poncho over her head, perfectly still while Zinner’s stately keyboard chords rang out, while she could even get away with donning a florescent gimp mask for the superb Heads Will Roll (surely a contender for single of the year?)

The best was saved for the encore though, with a blistering Y Control followed by a gorgeous version of Maps. It may not have been the breathtaking acoustic version that’s been doing the rounds recently, but it was still a heartstopping few moments. There was just time for a hectic Date With The Night before the house lights went up.

2009 may well have been the Year of the Synth, but it was also the year that Yeah Yeah Yeahs finally broke through and realised their potential. Their next move will be eagerly awaited.