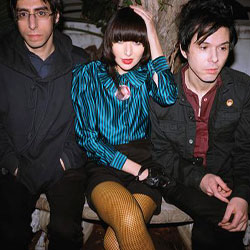 The Yeah Yeah Yeahs amble nonchalantly onto the stage with no fanfare whatsoever. This lack of pizzazz completely belies anything that happens next.

Karen O takes centre stage beneath a floating giant eyeball surrounded by swirls of blue glitter. Wearing a white leotard-cum-jumpsuit with blue and pink swirls and tubular fronds around her arms, she strikes a performance art pose with microphone aloft.

The band launch headfirst into Runaway, from new album It’s Blitz. The orchestral wistfulness of the album version is distilled through the pure rock and roll presence of drummer Brian Chase and guitarist Nick Zinner, both in black.

The song soon gives way to Dull Life, another new track, and the packed floor of the intimate former Shepherd’s Bush Empire, now sucked into the acquisitions portfolio of a certain mobile phone brand, bounce joyously around in one big, boisterous mosh pit.

Karen O matches them for exuberance, metallic strips on her fronds shining in the lights as she flings herself about, tossing her pageboy mane which would look androgynous on a human, somehow impishly sexy on her.

The familiar bassdrum ushers in Gold Lion to a rapturous welcome from a besotted audience whose enthusiasm lasts straight into Honeybear, also from 2006’s Show Your Bones.

At some point, unobtrusive fourth band member Imaad Wasif slinks on stage and takes up place behind a keyboard, demonstrating in person the electro influence that runs through much of It’s Blitz.

The band continue their reverse chronology with Black Tongue from first album Fever To Tell and early single Bang, breaking the frantic pace of continuous songs for Karen O to introduce it with a howl of “this one’s for the ladies! All the fucking ladies!”

After this, she runs off and bounds back on with a black rhinestone-encrusted jacket that would make Elvis proud just in time for current single Zero.

The eyeball spins and clouds appear, turning the huge peeper into the serene surface of the moon for Cheated Hearts. The heaving mass of people across the floor are only still in silent reverie for the swooping beauty of Skeletons, obligatory sea of mobile phones aloft, hoping for a glimpse of the jumpsuited one less ephemeral than the one in front of them.

“This is the Yeah Yeah Yeah’s love song! L to the O to the V to the E!” she roars, as swirling colours dance on the surface of the moon, and the band softly break into Maps. All of the bar staff stand stock still, backs to the beer queues, watching the stage and the glowing, whirling woman upon it.

Almost immediately, she swoops off again, reemerging for the encore in a white kimono with more coloured swirls. The band launch into Y Control and the rapturous crowd lose control accordingly with a jubilant surge of jumping and crowd surfing.

During the softer Poor Song, the crowd simmer down and Karen takes the opportunity to show off her outfit, fitted with a peaked hood that transforms her into a white-robed medieval knight. Moments later she folds up a face compartment, morphing into a white winged bird, singing into the microphone stashed in her beak.

Her face re-emerges for A Date With The Night and the crowd is whipped back up into an orgiastic people pile for one last time.