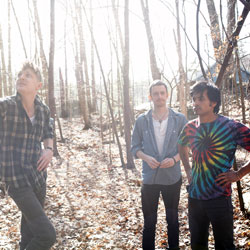 Yeasayer’s debut album All Hour Cymbals was in no way a disaster, even if it was slightly muddled, a convoluted melange of off-kilter rhythms and yelping vocals. Listening to it in one go was more of a chore then a pleasure. But their recently released follow-up, Odd Blood, manages to streamline and hone – transform, even – their sound into a more immediate and danceable model.

Booking Heaven as their only London date on this tour is a masterstroke. The venue’s impeccable sound picks up every blast of synth (there are at least four of them on stage) or thrum of bass, the latter reverberating around the narrow walls. The driving rhythms of Rome, for example, bounce along joyously, almost euphorically, as frontman Chris Keating jerks weirdly from side to side.

It’s Keating that holds attentions throughout, orchestrating things with arms flailing and a broad grin on his face. At one point he pauses mid-jerk to crouch down and pick up a mug of something warm, pausing briefly to take a sip before getting back to the matter in hand. Behind him, four big screens burn brightly, the colours matching the tall light boxes that house each of the keyboards.

It makes for quite a sight, and the vibrant lights are matched by a set that only drops below upbeat for the loping, Animal Collective-esque I Remember, with Keating in brilliant voice. Elsewhere, lead vocals are taken by multi-instrumentalist Anand Wilder – who is sporting what looks like a multicoloured adult babygrow – on the shape-shifting Love Me Girl. It morphs from its long intro into an early ’90s dance anthem. Many of the songs have been given a bit of an extra dance sheen, with recent single Ambling Alp and album highlight O.N.E spruced up and, in the case of Mondegreen, speeded up to near delirium.

Not everything works. There are songs like Strange Reunions that get lost amongst a swamp of percussion and synth swirls, and for all the new found immediacy there are moments when you miss the noodling of old. Luckily, the old songs aren’t completely forgotten and a clattering reading of Sunrise and an encore of 2080 pleases the pockets of fans who were waiting for their arrival.

But Yeasayer are a different band now. Along with Animal Collective they’ve taken, if not a leap, then certainly a sideways step into the strange world of immediacy.