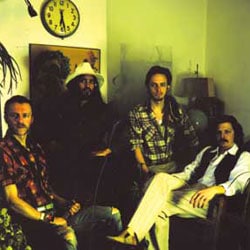 It’s all about Brooklyn tonight at the ICA. The New York borough’s star is firmly in the ascendent at present with acts as diverse as Vampire Weekend, MGMT and Hercules And Love Affair experimenting with sounds well outside the traditional, guitar-led indie gamut.

Into this heady brew, Yeasayer drip with a kind of spiritual exoticism mistakenly taken as ‘new age’ by some. Having first come to attention at last year’s SXSW festival, they have since been creating quite a buzz with debut album All Hour Cymbals, which is set for a re-release this side of the pond at the end of this month.

The four-piece take some time setting up and adjusting their vast array of musical paraphernalia before sliding into a swirling synth sound, which gently floats into your consciousness. First song Waves has lead singer Chris Keating tenderly singing with eyes shut whilst intermittently tweaking knobs, tapping a keyboard and occasionally shaking Maracas. Guitarist Anand Wilder makes an infectious sitar sound with his guitar whilst drummer Luke Fasano crashes cymbals before breaking into a tribal African style beat. The song ends with a dreamy ethereal synth swish. What a start. Welcome to the world of Yeasayer.

Theirs is a sound not easy to categorise having described themselves as both “Enya with balls” and “Middle Eastern-psych-snap-gospel”. Their influences are certainly wide ranging. Guitarist Anand Wilder has pointed out their affection for ’70s Bollywood soundtracks, Mapfumo records and Celtic music. They also have a prog rock infusion going on, most obviously influenced by David Byrne‘s collaboration with Brian Eno on My Life In The Bush Of Ghosts.

The only new unreleased song of the set, Tight Rope, comes early on, with Keating hunched over his synth machine, swaying backwards manically before breaking into song with his cohorts offering backing vocals.

For most of the set they act as if the audience aren’t there eventually addressing them half way through saying “we are Yeasayer but you probably already know that” in case anyone had turned up expecting to see Jean-Michel Jarre.

No Need To Worry has segments of the crowd singing along to the lyrics “no need to worry, we’ll get some jewellery for your mama’, with one punter at the front pointing at himself and then the band as if to say they should treat his mother.

They wrap up their set with Sunrise, with support act Dragons of Zynth re-entering the fray sprawled on stage tapping high heel shoes, drum sticks, maracas and anything they can get their hands on against the floor. Keating’s gospelesque, apocalyptic lyrics shudder out “The sky cracked a million ways, making me blind,” as the stage erupts into energy and handclapping reaches a crescendo. A mini stage invasion would be a fitting end to proceedings, but everyone is too civilised in these surroundings.

As the band leave, a sense of utter invigoration is tempered by the melancholic notion that it was all over far too soon. This is just the beginning of something special from this eclectic, genre-bending band.