by Ben Urdang
published: 19 May 2010 in Live Music Reviews
Tweet 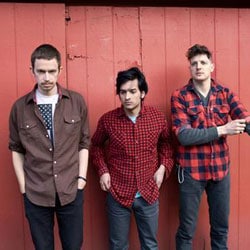 It seems like a while since Yeasayer released Odd Blood. In fact it was only February, but it’s been on such heavy rotation that it almost feels worn out. What was undoubtedly the album of the year at the time has been battered down the pecking order by familiarity. But when we found out that they’d be playing in London to coincide with an appearance on Later With Jools Holland, we made sure we were going to be there.

Turned out that this night was part of a series of gigs put on by Channel 4 and Top Man CTRL for students only. So we bought some books, didn’t read them, and slipped into a The Smiths t-shirt and a pair of plimsolls to head down to Shunt, the most bizarre, and therefore student friendly venue, they could find. Built into the interior of a set of arches next door to the London Dungeons, the Shunt is a long, stretched out corridor of brickwork. As you walk down the creepy extra long corridor between the entrance and the stage, there are Turner Prize-esque art installations to your right and a small open cinema to your left. The arch where the bands are playing holds no more than a couple of hundred students and a few aged, scraggly hacks.

Tonight support comes from Babe Shadow and Silver Columns, the latter being one of the best up-and-coming acts on the scene right now, with a whole bundle of pop songs boding well for their soon-to-be-released debut album. Unfortunately, tonight the sound quality doesn’t do their set justice, but those of us who know their work, know that they’re better than this.

Bearing in mind we’re being filmed for the telly and that there are Top Shop girls wandering about taking snapshots of those of us (not me) looking fashionable enough to be worthy, we don’t know what to expect of this gig. Turns out we’re not to be let down. Bathed in gentle green and red lights, Yeasayer give us the works. Sounding like superstars, they’re supremely tight and remind us of all the Odd Blood highlights, which is virtually its whole. Album opener The Children serves as gig opener as well, and while its manipulated and slowed down vocals cause it to be skipped on the iPod, tonight it sounds brilliant.

When not complementing each others’ harmonies, Chris Keating and Anand Wilder take turns with lead vocals, so there’s no chance of getting bored with either, and both are on great form tonight. In fact everyone is. There’s so little to fault that it’s not worth trying. Theirs is an unstoppable sound, marrying traditional indie rock band arrangements with tribal influences and pop hooks.

With Wait For The Summer and 2080 from debut album All Hour Cymbals and the lesser known but wonderful Tightrope, taken from the phenomenal 2009 4AD compilation Dark Was The Night, thrown in, tonight was more than just a clothing and media marketing campaign. And even if it wasn’t, who cares when marketing can be this good for the soul. The two singles, O.N.E and Ambling Amp, appear towards the end of the setlist and the album seems reinvigorated. With a Roundhouse gig scheduled for October, you can count on Odd Blood being at the forefront of everyone’s mind come the end of the year.