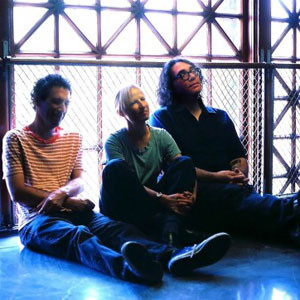 Yo La Tengo have never been a band to play by the rules, and this evening is no exception. Parading their 13th studio album before the London faithful, they mix eight of the 10 new tracks from Fade with double that number from across their near-30 year history in a set that comprises an Act I and Act II: distinct and surprisingly different in each one’s level of success.

The first half of the show, which kicks off with new album opener Ohm, shows the band in their more folkish, gentler persona. Amid a sparse set made of fairytale trees and delicate lights, the trio draw on their more melodic influences but, sadly, it doesn’t show them at their best. The pure acoustics of the Barbican, designed for classical music and unforgiving of anything less than honed perfection, shows the cracks rather than helps to plaster over them. Dream pop, indie, shoegaze… call them what you will, there’s still a dirtiness, a DIY quality to their music that works well in small venues and festival tents but doesn’t cut the mustard here.

This is a shame, because the concept works well: split the new album in half, play the gentler, poppier (one might say more accessible) songs from it before the interval, mixed in with similar stablemates of the last three decades – including Black Flowers, Tom Courtney and Big Day Coming – then switch gears after the break to show their darker side, the post-rock noiseniks who can mix classics such as Blue Line Swinger and False Alarm, from 1995’s Electr-O-Pura and 1997’s Sugar Cube, with more recent heavier post-rock including Beanbag Chair (from the wonderfully titled 2006 album I Am Not Afraid of You and I Will Beat Your Ass) and 2009’s If It’s True.

And the second half works well – much, much better than the first, as the born-to-play ATP feedback, layers and general cacophony fills the Barbican’s halls and reverberates from its chiselled acoustics perfectly. Perhaps because the first half was somewhat disappointing, this is superb, a wall of noise screaming from the stage and daring you to fault them. New songs Stupid Things, Paddle Forward, Before We Run and an alternative, heavier and richer version of Ohm, show that the direction they’ve gradually been taking over the past three decades, away from the influence of Love and The Soft Boys and towards an angrier, feistier, My Bloody Valentine, is the right one.

Maybe this was deliberate – show the fans that they can still do the ‘nice’ stuff, but in a way that reminds everyone the harder edge suits them better. There’s endless twee-pop newbies and revivalists around today, and with the exception of Field Music we really don’t need any more. We need anger and tortured guitars, darkness and screaming, and even if Yo La Tengo can still do both, it’s the dark side that’s needed more.

So they spend the second half winning the audience back, with old favourites Damage and Drug Test, then a characteristic foray into bizarre and random cover versions – Ant Music and Big Star’s Take Care tonight – and a second encore finish of their own Our Way To Fall. That last one suggests it was all very cleverly planned, doing it their way as they always do, reminding the audience, very clearly, they certainly still have it.