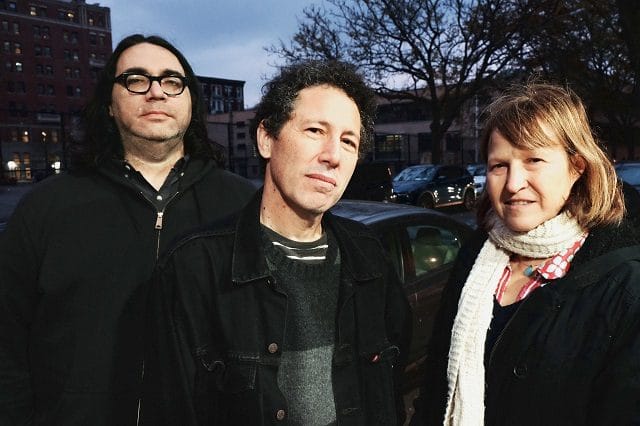 Yo La Tengo have proved themselves one of the most reliable, consistent live bands in existence. Over the course of their long history (they are now incredibly into their 35th year) they have built up a remarkable back catalogue and during their gigs no corner of it is off limits. Varied, different setlists are routinely played each night and both ends of the sonic spectrum are comprehensively explored. These two nights at EartH saw them reach new, vertiginous heights.

The shows may have been ostensibly in support of last year’s excellent There’s A Riot Going On album but they doubled up as something of a ‘greatest hits’ set also (even if their music has defiantly never troubled charts nor threatened any commercial breakthrough). Each night saw them play two sets (they’ve got more than enough material to make support acts unnecessary). On both occasions the first set broadly showcased their quieter side, with the second set seeing them turn the volume up (although as ever there were moments when the two blended and balanced each other out).

The reputation of the new songs is strongly enhanced over the two nights. The warm, fuzzy instrumental You Are Here opens each night and the gentle wooziness of Ashes also makes two appearances (both seeing Ira Kaplan walking from his keyboard to the drum kit to play three perfectly-timed cymbal hits before returning to take his seat). During the first night She May, She Might offers a masterclass in texture, layering and motion while What Chance Have I Got shows them at their gorgeously fragile, sorrowful best. On night two these new songs are replaced by the near-tropical serenity of Forever and hibernating comfort of Let’s Do It Wrong, Kaplan carefully sculpting and colouring the songs with his guitar playing. There are also some pleasing, leisurely segues in between also.

These quieter sets are embellished by older songs also. Sunday sees a rare outing for The Last Days Of Disco, a song which revels in the joy of musical minutiae and is still a revelation almost twenty years after its release. On Monday it is replaced by its album-mate, the sumptuously sad and meditative Tears Are In Your Eyes. They also reach all the way back to their 1984 debut album for The Pain Of Pain, a song that Kaplan says they “really have no business playing”. The likes of The Point Of It, I’ll Be Around and I Feel Like Going Home all register as the softest of hushed, barely-there lullabies, the beautifully detached vocals of Georgia Hubley being key as always during these moments. Later, we may get the quiet, toned-down version of Deeper Into Movies but it has the ecstasy of its louder counterpart. It is still just as much a feeling as it is a song.

Dream Dream Away and Out Of The Pool respectively offer pastoral, shoegazey second set openers before the volume is ramped up on both nights. And The Glitter Is Gone is fantastically invasive on Sunday and is followed by fan favourite Stockholm Syndrome which sees James McNew’s disarming vocal melodies set to some stinging guitar work from Kaplan. They plough through From A Motel 6 before slipping into blissful crowd-pleaser Autumn Sweater. The standard, it is fair to say, is ridiculously high.

Monday sees Flying Lesson (Hot Chicken #1) sounding tense and aggressive, centred around an especially malevolent guitar riff. It is followed by ragged live staple Big Day Coming and the melodically-charged Nothing To Hide and Sugarcube. Both nights feature Shades Of Blue which, when played live, sounds even more like bubblegum-pop refracted through a misty window pane (on the second night it appears judiciously right after soul-pop confection Mr Tough).

Both sets finish in traditional, epic guitar-shredding style. On Sunday the fierce transcendence of Ohm is followed by the Pass The Hatchet, I Think I’m Goodkind – the bludgeoning, grubby riff tonight sounding like it had also been helpfully set on fire (it also sees Kaplan somewhat impressively and uniquely play his guitar with another guitar, amidst the carnage of toppled mic stands and criss-crossing guitar leads). Monday sees them close with Blue Line Swinger which journeys from a beginning of deconstructed, disparate parts to an endgame of cohesive force via some heroic guitar-mangling.

It wouldn’t be a Yo La Tengo gig without some impeccably-chosen covers in the encore and over the two nights we get ‘Til The End Of The Day by The Kinks, I Heard Her Call My Name by The Velvet Underground, Let’s Be Natural by The Rutles and an exquisite version of folk standard Goodnight Irene. The first night even sees them find time to squeeze in their own tracks Season Of The Shark and Tom Courtenay also. It’s truly breathtaking stuff.

Both shows see the band in amazingly generous form and in terms of musicianship they’ve arguably never been better. Instruments are freely rotated, moments of humour surface throughout and their independent, freewheeling spirit is well and truly preserved. As we leave the venue trying to take stock of what we’ve just seen, it feels apt to simply recall the (self-deprecating) name of their 1995 outtakes and rarities album. Genius + Love = Yo La Tengo.