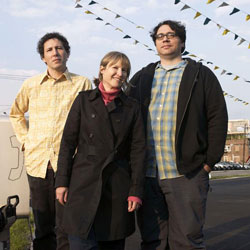 2009 is New Jersey trio Yo La Tengo’s 25th year in existence, a longevity you’d be hard pushed to find anywhere else within the fickle indie scene.

While never achieving mass success they’ve certainly garnered critical acclaim and attracted a loyal band of followers, many of whom squeeze into the confines of the Queen Elizabeth Hall tonight.

This year’s Meltdown festival curator, free jazz pioneer Ornette Coleman, is also clearly a fan having invited them along to play.

Ira Kaplan (acoustic lead), Georgia Hubley (drums/vocals) and James McNew (bass) sit down at their instruments for the touching acoustic opener, and follow this with the equally mellow Black Flowers. While you can hear within their sound echoes of the past, Simon And Garfunkel especially, you can also detect how they in turn shaped what came after. Belle And Sebastian and Kings Of Convenience, for instance, both seem to have taken a large note out of the Yo La Tengo book to craft their fragile, wistful sounds.

Kaplan then tells the audience that they are here more to answer questions rather than play music but were warned the London audience might be too reticent. This acts as the proverbial red rag and the audience pipe up en masse. Someone asks who Yo La Tengo’s, harder, rockier alter egos, the Condo Fucks are, which provides the perfect launchpad for the trio to air one of the Fucks’ tracks, a burst of shouted rock and roll.

Another question triggers a cover version of Velvet Underground‘s I Found A Reason while the next inspires the band to play their gentle, gorgeously wistful Dreaming. When the audience participation doesn’t work out though, the results are often hilarious. Like when Kaplan confides that he once fainted in a hot spring once, only to have his story interrupted by a man who declares, “I fainted on a bus once! In GREECE!”. Or when another audience member with his arm around his girlfriend states, “Anna and I enjoy most of our intimate moments to your music. What music does it for you?”, to make the room both collectively cringe and burst out laughing.

Many more audience enquiries are fielded entertainingly between songs, but it’s not an approach appreciated by all, with one girl impatiently screaming “PLAY!” repeatedly at the top of her voice. The Q&A format may encourage the geeks and self-made comedians to take over but how else could we have discovered if Yo La Tengo like cricket, what their favourite album cover is or whether they’ve ever been to the Antarctic?

An airing of the joyfully upbeat, falsetto-led Mr Tough leads up to a powerful encore. This includes one of the stand out performances of the night, as Hubley adds her vocals to the beautiful simplicity of Nowhere Near. A cover of The Kinks‘ God’s Children then brings the night to an end, and a deserved ovation.

Yo La Tengo are the perfect indie band for both critics and fans alike as they’ve never made it big enough to be dismissed as a sell out. But you do get the distinct feeling after having heard the strength in depth of their material during tonight’s gig that after a quarter of a century, they surely deserve to get their big break and wider audience before the next 25 years pass by.