by Bekki Bemrose
published: 7 May 2018 in Live Music Reviews
Tweet 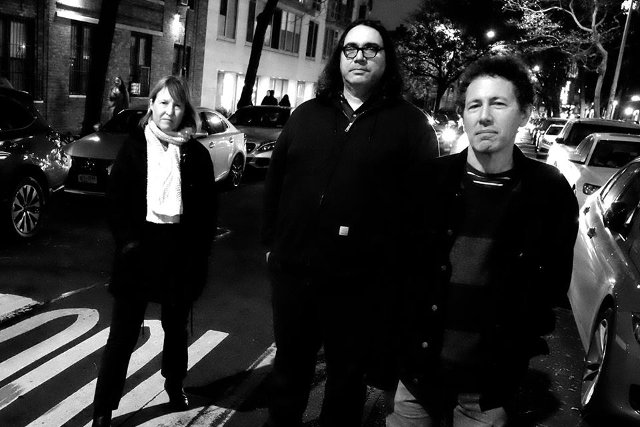 The sun is shining and, while on any other day it would be too tempting to sup a cold one on the banks of the river for the final hours of glorious daylight, Yo La Tengo easily tempt a crowd into the darkness of the Royal Festival Hall. This band has been held so dear by so many for so long, even after so many years the heart does a little flutter at the thought of seeing the New Jersey trio surprise, as they always do.

It turns out tonight’s show will be split out into two quite distinct sets. The first half’s vibe is mainly dictated by and draws from their excellent latest record, the not entirely accurately named There’s A Riot Going On. Like that album’s generally soft quality, their initial stint mines their seemingly bottomless well of dreamy spectres.

Album opener You Are Here kicks the gig off, and its irresistible groove builds and swells surreptitiously, which lends the concluding richness a crafty surprise element. The barber-shop vocals of Forever make for the sweetest lullaby, but there is little impetus to dose, they just make it so easy to get lost in the very particular world they’ve created. Even their proclivity for swapping instruments and vocal duties is somewhat mesmerising.

In Pablo and Andrea YLT prove they can be as gentle as gentle can be and still get you right in the gut. And on Black Flowers James McNew gloriously demonstrates he has the voice of a goddamn angel for one of the set’s highlights. But they go on to end the first half with the transitory amble of Here You Are, sending the crowd to the bar for the interval feeling pretty weightless.

Beer break concluded, they begin the second half with the sublime Dream Dream Away from their latest, suggesting the whole evening will be a tender affair. But Fade’s Stupid Things begins to pick up the pace and volume before the shabby loose rhythms of Let’s Save Tony Orlando’s House proves what a crowd pleaser it is. It’s also one of the tracks that sees Georgina Hubley and McNew double up on percussion, which adds meat to the bones of their ostensibly fragile compositions. Returning to their latest record, For You Too’s grimy guitars and melancholic melody are a live revelation, proving even more effective than on record.

The final part of the set includes a treat of three of stone-cold classics: Deeper Into The Movies feels so fresh and urgent you’d have thought they’d written it only yesterday; Tom Courtney takes on a celebratory air; and the terrifically sprawling I Heard You Looking is quite simply ecstatic. Kaplan goes into no holds barred shred mode, and it’s an unmitigated delight to see him and the rest of the band into a 30-plus year career play with such unfettered enthusiasm and, at the risk of sounding trite, genuinely heartwarming. The night ended with a trio of covers for the encore, from Television Personalities, The Young Rascals and The Bonzo Dog Band, but tonight belongs to Yo La Tengo’s own songs.

Undoubtedly, there are countless audience members whose Yo La Tengo gig attendance runs into double figures. Watching them play songs from across their near-faultless back catalogue on this bright May day it is easy to why, as each time is as gratifying as the first. To exit the Royal Festival Hall after a Yo La Tengo gig is to leave convinced their music is good for the soul. They once again proved why they are so beloved.