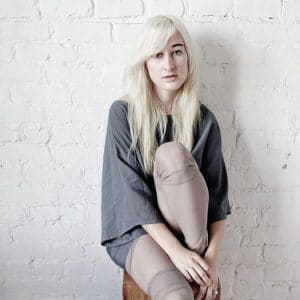 Zola Jesus‘s recent album Stridulum II has been making some big waves. Essentially the project of 21-year-old Former Ghosts member Nika Roza Danilova, it’s an album full of big, stirring songs. Accessible but disturbing, it’s a hugely impressive piece of work. Ahead a series of gigs that included a spot supporting Fever Ray, this was her first ever London date.

The setlist of course focused on Stridulum II. Beginning with the short, sparse Trust Me, Danilova stands centre stage accompanied by a man on keyboard and another on programming duties. Her tiny figure is framed by hair bleached blonde, and she’s dressed in gothic attire that makes her look like a deranged escapee from the Christina Aguilera/Ashlee Simpson finishing school.

The dark mood is set with minimalist beats underlying her vocals. Strong to the point of foghorn bellowing, comparisons have been drawn to Florence Welch. Compare the two and Zola Jesus fans will try to shout you down, but the similarity is there. Both are theatrical and manipulate their songs into over-dramatic epics. However, while Florence turned her first album into an inclusive monster, swiping aside all in its way, Zola Jesus’s material is aimed more at the outsider, her minimal instrumentation exacerbating the air of gloom that accompanies her. Having said that, Trust Me and the following track, I Can’t Stand both have uplifting messages that while things are a bit pants right now, better things are coming.

Taking on her role and camping it up, power ballad Stridulum ends with a piercing scream. On stage she wanders around like a mad woman, rabidly looking everywhere apart from her audience. During Sea Talk and then again on Manifest Destiny she marches down into the audience forcing a path before finding her way back to the stage. At all times she rather seems to be in her own universe.

The songs are all pretty great. Lots of power chords matched by her power voice. Run Me Out is irresistible and recent single Night is sensational, during which she retreats off the back of the stage and just kind of hangs out on her own, singing to the ventilation system. The instrumentation keeps the listener at arms’ length, and there’s obviously a certain reliance on pre-programming, but the gig feels like a fair representation of Zola Jesus and their music.

They’re gaining support from every corner, and tonight The xx can be spotted signing up to their mailing list. Danilova says her first London audience has been good to her, but she’s been good to us too.