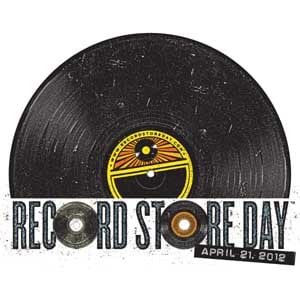 21st April 2012 is Record Store Day. The fourth annual Record Store Day, to be exact; the day when all manner of exclusive new tracks, covers, vinyl packages and goodies of mindboggling variety are released to tempt ‘the music consumer’. It’s a very fine excuse, should you for some reason need one, for you to bowl down to your local purveyor of record discs and peruse their selection like the free-spirited, snazzy-dressing muso-in-the-know you always thought you could be.

So don your obscurest band t-shirt, gorge on this most special of themed columns and support small record stores the length and breadth of our great Sceptred Isle.

Lead single Anywhere (or, to give it its full title, Anywhere by Anywhere, from their album Anywhere) is no half-cocked, pseudo-supergroup churn out; it’s a measured, multi-faceted mini masterpiece most reminiscent of early, more acoustic-oriented ATD-I. The LP ought to be quite something – especially if you can snaffle the RSD limited edition.

Miles Kane – First Of My Kind
Miles Kane has been many things in his time – a Rascal, a Last Shadow Puppet – but he seems pretty steadily settled into a solo career now. Seems to be working out for him too: while most of us will spend RSD queuing up outside a record shop in some drizzly city, Miles is wandering round Paris in the video for First Of My Kind.

Musically, it’s what we’ve come to expect from the Liverpudlian, but it sounds bigger somehow – it’s a big, brass-laden stomper of a song, easy to sing along with without being particularly challenging or original.

In fact, the most arresting thing about First Of My Kind is the fact that it’s produced by Skream. Yes, that Skream, the doyen of dubstep, La Roux remixer, and part Magnetic Man. Not that you could tell here at all – there’s no wobbly bass or drops to be heard anywhere. It’s a typical Miles Kane record.

Slow Club – Edge Of Town / Francois & The Atlas Mountains – Gold Mountain
Record Store Day wouldn’t be Record Store Day without some mutual backslapping. This year, Slow Club and their buddies Francois & The Atlas Mountains are doing the honours, covering a song of each others and releasing it as a Limited Edition double-A side. And both bands manage it rather beautifully.

Slow Club tackle Francois’ Edge Of Town, all shimmering guitars and finger clicks, with Charles and Rebecca sharing vocal duties (and noticeably trying, and failing, to avoid affecting a French accent). It’s beautiful and haunting, and could easily fit onto a Slow Club album. It’s a song well suited for them.

The same could be said of the Slow Club track that their French friends have chosen to cover. Gold Mountain, from recent album Paradise, fits very nicely into the Francois template – smoky, sultry and gentle, with lead singer Francois Marry’s French accent making the Sheffield band’s lyrics sound impossibly seductive. They really do sound like a pair of kindred spirits and it’s one of the real treats of RSD that little gems like this appear.

Big Deal – Paris / S.C.U.M. – Talk
Oh. Split singles, it would seem, are like London buses: you wait ages for one to come along and then you get a pair, each emblazoned with inappropriate messaging.

But Big Deal and S.C.U.M.’s reciprocal backscratch, like t’other split single we’ve weighed up, is something special: bear witness as Big Deal take on S.C.U.M.’s 2010 beauty Paris and in turn have Talk – one of the tracks of 2012 so far – remixed by the art-rocking London five-piece. Win-win? We think so.

Beth Jeans Houghton & The Hooves Of Destiny – Atlas
Whay aye, chicken pie! Geordie Houghton’s Atlas has been around in single form for, ooh, more than a month now, which makes it practically prehistoric by our standards. Cue RSD treatment: seven-inch picture disc? Check. Exclusive B-side never to be heard anywhere else ever? Present. Limited run of just 250 copies in the UK? Obviously.

And just check out the production values on the video, an arty black and white effort in which a canny lass befriends a rabbit and learns how to make things disappear with the click of her fingers. Granted, we’d rather the rabbit was made to disappear into a stew, but this is four minutes well spent nonetheless.

Cold Specks – Holland
Al Spx, aka Cold Specks, has one of those voices that just makes you stop whatever you’re doing and stare at your speakers. Impossibly rich and powerful, it sounds like she’s drawing on every single emotion. The results are really something special.

Holland is taken from the Dancing Coins EP, which Spx is releasing especially for Record Store Day, and it’s a stunning piece of music: soulful, majestic and, thanks to Rob Ellis’ production, it sounds both skeletal and minimal without being remotely lo-fi. It’s glorious stuff, and as Spx sings the final line (“We are many, we are dust”), you can feel the goosebumps run up your spine. From the sounds of it, forthcoming album, I Predict A Graceful Explosion, has the perfect title.

The Icarus Line – King Baby
The Icarus Line are rock and roll as it should always be: unpredictable, seedy, self-destructive, charismatic. Creative force Joe Cardamone embodies such vice-ridden virtues, and his rotating door approach to band members has given the Icarus catalogue a certain inconsistency over time.

King Baby, though, is unreservedly great, and its sordid, Stooges-esque make-up manifests as a stubborn earworm, eagerly pointing the way to Cardamone’s RSD effort: The Icarus Line’s limited release Live In London LP.

Taffy – So Long
No, they’re not Welsh. Taffy are, in fact, following in the grand traditions of Shonen Knife and, um, that band who were in Kill Bill, by hailing from Japan: clutching their guitars, and by the sound of this, a copy of Echobelly‘s debut album.

This is Taffy’s debut single, released especially for RSD, and although this may well get lost in the slew of rarities and special releases that go on sale on this day, they sound like they could be worth keeping an eye on.

Wrap your ears around it.

Tu Fawning – Anchor
Ah, Portland – famously liberal and eccentric home of Carrie Brownstein, Black Francis and Steven Malkmus. So, you know, no pressure, members of Tu Fawning – not a lot to live up to there.

Thankfully, Corrina Repp and Joe Haege seem to be following in the footsteps of their celebrated neighbours: Anchor is haunting, atmospheric, and dominated by Repp’s expressive vocals. The drums and synths intertwine under her voice, and the overall effect is both lulling and sinister.

The band’s second album, A Monument, follows in May, and by the sounds of Anchor, they’re well placed to feature in Portland’s Hall of Fame very soon.

Of course there are many more exclusive releases for this day, many from big name acts ranging from Arctic Monkeys and Arcade Fire to Suede and Sonic Youth, and on through the alphabet, as is evidenced on the Record Store Day website.