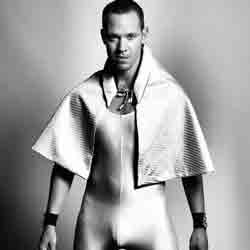 If you were thinking that last week’s tracks column was special, and that the chances of seeing such a magnificent selection of massive songs, elegantly and concisely skewered by no less than four different writers, each with an ego the size of Texas and opinions pouring out of literally every orifice had gone, you’d be right.

That was an odd week. It’s not particularly clear what really happened. It was almost as if the music industry had gone out for a power lunch, happily digesting the big songs it knew could occupy the headliner writers for the next few months, chowed down on a couple of dozen bad oysters and… Well you can picture the rest.

This week, things are calmer. Unless you’re a Whigfield fan. And who isn’t. But the standards remain high. Unless you think that Whigfield’s music is the soundtrack to Satan’s disco. And who doesn’t.

There’s nothing like launching an album campaign with a full frontal picture of yourself dressed eyebrow-raisingly in fetching white lycra. Especially if you have a nickname that rhymes with your actual name. While some onlookers doubtless will be suffering pangs of jealousy at how snugly Will Young fits into his striking outfit, the song itself – the first taste of upcoming album Echoes – marks a change of direction for the sometime talent contest winner whose career over the last decade now surely transcends such associations.

Young’s Groove Armada collaboration History and some tasty Fred Falke remixes – especially of Tell Me The Worst – hinted at things to come. Now, Jealousy continues Young’s embracing of gossamer-smooth electropop, sounding like a missing harmony for Robyn’s Dancing On My Own and highlighting a beautifully delivered pop vocal.

Get jealous at Will on a trapeze with the video here:

Or check out The Alias remix if you fancy something a little more ravey:

Fresh from not getting a Mercury prize nomination, thus raising the hackles of an entire generation of over-earnest, over-serious, pseudo-intellectuals who think that Wild Beasts are the single most exciting thing to happen to the world of over-earnest, over-serious, pseudo-intellectuals since someone invented a journal that came ready filled with deeply enigmatic romantic ponderings, Wild Beasts are releasing another single from Smother.

And while the song is rather lovely, sliding in and smothering (HA! And they said I couldn’t do topical music based puns. HA!) you in a warm ever-so-slightly disco tinged embrace, the video is so rubbish you kind of wish they’d won the 20,000 so they could have bought some whizzy CGI effects for the next one.

Yes. Yes, yes, yes. YES! How to recapture the early promise of Malkmus and his Jicks? Enlist the producing services of Beck, veer back towards Pig Libs wistful timbre and swish in the general direction of Fractions & Feelings, Vanessa From Queens and other assorted gems.

We like Tigers. We like it a lot; every bit as much as we did Senator. In fact, probably more. Bring on Mirror Traffic.

Patrick Wolf Time Of My Life

To successfully do orchestral manoeuvres in a pop song, to take the grandiose pomposity of having four score and seven serious musicians doing classically trained things while you sing a simple tale of heartbreak and loss, AND to not have the whole thing fold in on itself in a sort of collapsing star of dull, po-faced shitness, takes real skill.

To do it when said orchestral manoeuvres involve a bassoon makes you a magician.

Patrick Wolf, we salute you.

Ladytron. Sent from the future to revive the recent past. Sound unchanged since the turn of the century. Looking a little frayed around the edges, and yet still inherently futuristic.

White Elephant? Er Were not entirely convinced. But its Ladytron, so Yeah.

Good Christ, Whigfield. You made men of us boys back in 1994. You spoke to us in a private, sexy language that nobody else understood: Saturday night, dee-nee-nee-nah-nah-nah-nah. We were in love.

But things change; people grow apart. The video for Cest Cool looks like somebody left Caprice out in the sun too long, and the Saturday Night moves have been consigned to the dustbin of history. Cest ne cool pas.

But who are we kidding? We cant stay mad at you, Sannie, and Cest Cool really is cool six or seven spins in. Besides, your anti-gravity boobs are little short of magnificent. All is forgiven come here, you!

A Winged Victory For The Sullen Steep Hills Of Vicodin Tears

There is a context and a story to this track, which we could recount, but after typing out the band name, our fingers hurt too much.

So we’ll leave you in blissful ignorance. And it will be particularly blissful if you listen to the track first, because Steep Hills Of Vicodin Tears is an achingly beautiful instrumental that deposits you on the edge of a vast empty crevasse to tearfully hug the insides of your duffle-coat as you watch our sun die.

Not literally. That would be a pain if you were listening to it on your way to work.

Fruit Bats Youre Too Weird

This is brilliant. The serious expressions; the tragic fashions; the understated-yet-beautiful track itself. This is the sort of stuff wed be putting out ourselves had we not embarked on the long and lonely road of male pattern baldness having barely emerged from primary school. Ask us no questions and well tell you no lies.

We’ve been asked to keep this one brief. So here goes: Surfing Bird by The Trashman, covered by Vampire Weekend on the set of a amateur dramatic staging of Can’t Stop by the Red Hot Chili Peppers.