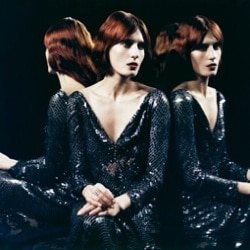 As Sting once sang: a doo-doo-doo. A daa-daa-daa.

Says it all, really.

We suspect it will be dreadful.

Mind you. Probably not quite as dreadful as that Moves Like Jagger song.

Anyway. Apart from irrational and irrelevant hatred, this week’s column is mainly based around seeing Leona Lewis where others do not (and how this could lead to the rise of a fascist state), trying to be better than Beady Eye and, uh, musings on what maketh the wild man.

Florence And The Machine Shake It Out

It’s not a bad comparison. It’s not a disastrous association. Everyone quite likes Bleeding Love. Don’t they? So the fact that Shake It Out could well be that track’s younger, more baroque, ever so slightly gilded second cousin is something immensely appealing.

La Bush, bless her, is busy thinking of 50 Words For Snow, which is the title of her new album, which is set for release towards the end of November. According to certain tabloid woemakers, we might well have snow by then. And if we do, we might get bored of referring to it as snow, in which case such an album could very well be just the thing.

But while we wait for her ruminations we have Wild Man, the lead single from the album. It has a synth sound last heard on George Michael’s Free, from his album Older. Fitting really; Kate Bush, too, is older. And maybe colder.

Noel Gallagher’s High Flying Birds AKA… What A Life

Wow. An eight minute video featuring Russell Brand? This isn’t the start of something wildly overblown, vastly out of control and completely bloated, is it Noel? Be Here Now. Again?

AKA… What A Life, is good, if non-earth shattering. It’s a distance from that Kinksian, cockney can-can that The Death Of You And Me recycled from The Importance Of Being Idle, instead sounding not unlike Guess God Thinks I’m Abel. As written by Liam. Maybe this brotherly plagiarism indicates a thawing in the sibling rivalry? Maybe not.

The Drums – How It Ended

We’re not cinematographers, but putting a hessian sack over your camera prior to commencing filming just seems odd. Not stylish, not clever, just odd. It doesn’t really evoke a feeling of anything. Except, perhaps, being kidnapped.

Yeah, stick that filter on and point the lens at the backdoor of a Transit; et voil! Note-perfect victim’s eye view of the abduction.

Which doesn’t seem to be exactly what the song is aiming for. Not unless someone can indicate the link between that and wishy-washy, downcast, melancholic indie-schmindie, that has spent too long pouring over The Cure‘s more heartbroken moments.

Band Of Skulls The Devil Takes Care Of His Own

Sometimes, you just want something completely unreconstructed to scramble out of the swamp, slap you about a bit and then disappear completely from view.

So thank you Band Of Skulls, with the first single from their second album for being that something.

Esben And The Witch – Hexagon II (The Flight)

We love Esben And The Witch. So to find out they’re releasing a some new material (six tracks, in fact) as part of a digital-only EP makes us literally cock all over our hoops.

Hexagon II is a icy-cold, glacially beautiful piece of stark wonderment. You could hang it in a gallery and people would trek from the four corners of the earth to gaze at it in awe. Provided the gallery had speakers. Of course.

Psst. Oi. Jennifer. Jenny. J-Lo. J-LO. J-LO! Your song title is but a single letter from a single word summation of your artistic output and displaying a hitherto undemonstrated self awareness and deprecatingly caustic wit.

Sort it out, love.