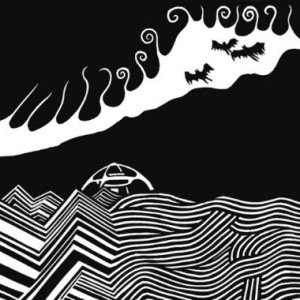 It’s things like this which keep us up at night. So perhaps we should just forget it and have at some tracks instead.

Atoms For Peace – Default
In the pantheon of unlikely collaborations, Thom Yorke and Flea from the Red Hot Chili Peppers is probably up there with Bowie and Bing, Coldplay and Jay Z, and Lou Reed with Metallica.

Although prising Nigel Godrich out from behind his desk was probably a bit more predictable. Fear not though, by the sound of Default, we’re unlikely to see Thom Yorke jumping around with a sock on his unmentionables. It is very much in the vein of Yorke’s solo album The Eraser, full of glitchy beats, portentous synth chords and Yorke bemoaning that he’s “made my bed, and I’ll lie in it”.

In fact, it’s hard to see what Flea’s role in this is, as there isn’t even a recognisable bass line. But for Radiohead fans itching for some post-King of Limbs material, it will do nicely.

TOPS – Diamond Sky
There’s an awful lot of capitalisation going on in band names these days. Maybe they’re just getting louder. Maybe the world is going deafer. Maybe we’re getting older. Whichever it is, in a world where everyone is shouting, TOPS deserve a chance to be heard. WE SAID THEY DESERVE A CHANCE TO BE HEARD.

On the same Montreal based Arbutus label that brought us Grimes, TOPS share both the sense of unforced weirdness and the propensity for doing things a little differently to how you might expect. Something which makes them both appealing and ever so slightly scary.

On Diamond Sky the way the head-nodding jazzy synths bash into Jane Penny’s, um, idiosyncratic vocals make you sure a disaster is close by. But somehow it doesn’t. It’s like being taken for a ride by a taxi driver with only one eye. The depth perception is off, but they somehow always manage to avoid that awkwardly parked Fiesta before tragedy ensues.

Martha Wainwright – Proserpina
Proserpina was the final song written by folk legend Kate McGarrigle before her death from cancer in January 2010, so there’s a fair amount of emotional baggage to be expected in daughter Martha Wainwright releasing it as her first single for over 4 years.

And, as expected, it’s pretty emotionally devastating. Wainwright has always been at her best with more minimal arrangements, and a simple performance with piano, strings and some ghostly backing vocals make Proserpina a truly beautiful 4 minutes.

It bodes well for the forthcoming album Come Home To Mama, and of course, acts as the perfect tribute to McGarrigle.

Rachel Zeffira – Break The Spell
If achievement frightens you, please don’t stand too close to Rachel Zeffira. For in addition to being a classically trained multi-instrumentalist, an opera soprano, the half of Cat’s Eyes that isn’t Faris from The Horrors, she now also co-runs a record label upon which she’s releasing her first solo album The Deserters. Which she wrote. And produced.

Break The Spell is the first track from it, and well, it’s wonderful. Imagine attaching Goldfrapp to the driving pulse which powered the last Horrors album (and TOY’s debut) before watching as it ascends to a more celestial plane and you’d be somewhere near.

Swim Deep – Honey
You know those Ones to watch in 2013 lists that will appear at the start of January? Expect Birmingham four-piece Swim Deep to feature pretty prominently in all of them. They’ve already built up a fair buzz around with their last single King City (a love song to Jenny Lee Lindberg from Warpaint no less), and the follow up is even better.

Honey swoops, dives and shimmers, and is the perfect song to soundtrack these last days of summer. It’s got the yearning wistfulness of King City, but there’s also a call to arms in here, a plea for more action and less talking with the line “don’t dream in your sleep, that’s just lazy”.

And, ironically enough, it’s one of the most dreamy songs you’ll hear all year. Although Jenny Lee should probably invest in some extra security, just in case.

Tim Burgess – A Case For Vinyl
In the pantheon of unlikely collaborations Tim Burgess and Kurt Wagner would seem to be up there with Thom Yorke and Flea or Bowie and… wait a minute. We’ve been here before. Anyway. It’s slightly unlikely. But, if A Case For Vinyl is anything to go by, it’s one that sent Burgess off in a direction that while unexpected, is also going to lead to somewhere great.

A Case For Vinyl is simply lovely. Stripped-down and melancholy. The kind of song you can imagine strumming on your porch at dusk, a golden sunset burning in the sky, the embers of a dying relationship turning to charcoal in the hearth of your heart.

Kanye West, Big Sean & Jay Z – Clique
While Watch The Throne was an undoubted triumph – the sight of sold-out arenas all over Europe bouncing up and down to Niggas In Paris was one of the defining sights of the summer – Clique does feel like Jigga and Yeezy are rather scraping the barrel now to keep the party going.

It’s not that there’s too much wrong with it, it’s just that we’ve heard it all before. Kanye tells us about his girl who’s a “superstar, all from a home movie” (that’s Kim Kardashian, you may have heard of her), Jay-Z pops up for a couple of verses to tell us how he’s really rich, famous and a great rapper, and Big Sean’s also along for the ride, talking about ‘freaky women’ and the size of his bank account.

You’re basically listening to three very rich men telling you how great they are. So, maybe with all that money, they can afford to go on holiday and give us all a break for a while.