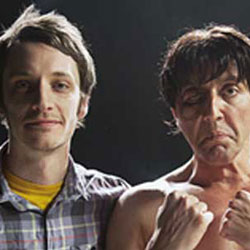 Greetings! It’s a pleasure to see you here again. We’re starting to feel that you really appreciate this labour of love. While you’re out gallavanting in the hot, bright and balmy outdoors, we’re slaving away on your behalf, the irony of the situation far from lost on us; we’re absolutely snowed under here!… (*tumbleweed*).

Still, this week we’ve more than enough to justify your tipping the blinds and hunching over a flickering screen. Unless you’re one of those fancy pants wi-fi types who lounge resplendently in their pristine gardens and loudly proclaim how excellent the glare reduction is on their brand new iPads; loud enough, certainly, so that their long-suffering neighbours can’t help but hear (eff you, Gary!).

Let’s get cracking, then, with the last installment before Record Store Day, when we’ll have a bloggy-featurey-fingy gawping at commemorative releases, bigging up in-store events and helping you decide which band t-shirts will strike the right balance between obscurity and pretentiousness on the big day. Probably.

Ah, we’ve seen some cracking videos this year, haven’t we? There was that one where the girl danced in the nightclub, and that other one where Lady Gaga gave birth to herself. You can ring the bell, though, because we have a winner, and, as we imagine guest vocalist Ian Brown might say, you can shove those other promos up your bollocks.

Quite apart from the fact that Open Your Eyes is a massive track, complete with de rigueur glitchy breakdown and euphoric climax, it’s accompanied by a rollicking Rocky parody starring Peter Serafinowicz that just has to be seen. Seven Ivan Dragos out of five.

From a skewed debut album to its inspired follow-up and beyond, Wild Beasts’ quest stands upon the edge of a knife. Stray but a little and it will fail. Albatross, thankfully, sees the band on top form, their chiming, timeless sensibilities brought to the fore to searing effect; a track that burrows into ears and resides comfortably therein.

While the high-art video may have its detractors, we’re happy to sit through it time and again. As we lounge here scratching our bare chins, nodding pensively, it actually looks as if we know what we’re talking about for once. Not the sort of effect one achieve sat in front of a Justin Bieber promo.

This one time, at Benicassim, we turned out to see Klaxons, but they weren’t there, and instead we found ourselves faced with these pale guys in skeleton outfits, and they played a load of psychedic funk-rock, and we boogied ourselves into the sand.

But enough of our Pullitzer-standard reminisces; WHOMADEWHO have moved on and so should we. Every Minute Alone, released ahead of the Knee Deep mini-LP, dials back the funk in favour of a straighter rock sound. It’s still grand because it’s still WHOMADEWHO, but still… Not sure about this new direction.

Wouldn’t it be nice if Bruce Springsteen was a little more psychedelic? A tad more prone to tie-dyed music videos; fonder of hazy, non-anthemic numbers; more receptive to the concept of minimum budget, maximum beard?

We needn’t get our people to have a word with The Boss’s people, though – which is just as well, for their sake – because Moon Duo have deigned to descend from high orbit to fill the far out, slightly dazed and very confused void in our hearts. Mazes is a shot of languid ’90s alt-rock so vivid, so pervasive and so enjoyable that we’re going to have to – in what we imagine is the true spirit of the band – invent a new term to describe it: dream grunge. Yeah. Click on, buffer in and drop out.

Bologna is the city that will just not stop giving. First ragu alla bolognese, then Pierluigi Collina, and now Husband? Citizens of Bologna, with these exports you are spoiling us!

But no, seriously, Husband successfully endeavour to bring us just as much pleasure as Signore Collina’s beautiful baby blues and perfectly round head: Love Song is the sort of filthy, tumbling, savvy musicianship that, if kept up, could see them playing the ambassador’s reception any year now. Buon appetito!

Napoleon In Rags, eh? They must be referring to the retired Napoleon, soaking up the rays on Elba and Saint Helena; his cut-off jean shorts and garish Hawaiian shirt stained with the previous night’s margheritas. Oh, Bonaparte – you are a cad! Not so keen on your choice of wallpaper, though.

Empty Promises forsakes the Little General’s sun-kissed dotage, however, and instead finds hard rock inspiration in the younger, more emo Napoleon: a whiff of grapeshot here, a Council Of Five Hundred there. Such ruthlessness will see these lads will go far.

What a smashing name Chad VanGaalen is. He could so easily form half of an off-beat, crime fighting pair of renegade cops who don’t play by the rules. They’d bust heads and take names, much to the exasperation of their overweight Captain. “VanGaalen! Cyzinsky! Get your asses in here!”

Until such an inevitable pairing presents itself, illustrator/artist/musician/producer/inventor Chad has busied himself with his latest solo LP, and Sara is something of a teasing peak at its treats. VanGaalen might be a bad ass, but he’s a bad ass with a heart of gold according to this splendid number.