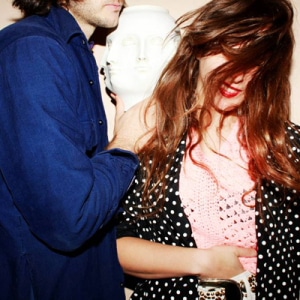 The thing about tracks, the thing that no one ever appreciates, is that it is NEVER ENDING. Tracks never stop. They never cease. They’re always coming at you, from all sides, from all angles. Big ones. Small ones. Short ones. Long ones. Every single single demanding attention. Wanting to be heard. Its raison d’être: I play therefore I am.

Oh God. It gets you down. Particularly when, upon having dedicated three minutes of your time to something and it turns out to be dreadful. Then, the sheer pointless weight of it all becomes to much to bear. The strain begins to show.

But conversely, when it those 180 seconds are good, our spirits soar. This week has a bit of both. It is the archetypal mixed bag. It has the sublime, it has the ridiculous. It has the good, the bad, and Marilyn Manson. Our mood, therefore, is just about balanced.

Beach House – Myth
But we’re starting with the sublime. Myth, the first single from Beach House’s greatly anticipated new album (called Bloom, out in May) is a thing of wonderful beauty.

Dream pop, it may be. If your dreams involve floating on a blissful bed of delicate harmonies and swirling – yet restrained – noise, and not being naked in a science lesson at secondary school just before your big presentation.

Björk – Hollow
Of the video Björk says, “It’s just the feeling when you start thinking about your ancestors and DNA that the grounds open below you and you can feel your mother and her mother, and her mother, and her mother, and her mother 30,000 years back. So suddenly you’re this kinda tunnel, or trunk of DNA … All these ghosts come up so it ended up being a Halloween song and quite gothic in a way … It’s like being part of this everlasting necklace when you’re just a bead on a chain and you sort of want to belong and be a part of it and it’s just like a miracle.”

We couldn’t have put it better ourselves. And remember: Vitamin C brings you down if you start to freak out.

Having eyes only for one another, the pair have ditched old misery guts to offer up Nova; a track hewn from delay-chamber aesthetics into a passage so slight that it barely registers. What does register is its reverberating vocal and understated, tinder-like percussion. Perfect rainy night fodder.

Dexys – Nowhere Is Home
Yet more reunions. Except, this reunion is also a rebranding. A rebranding which makes the reformed group sound less like a band and more like the proprietors of a range of eateries specialising in fried chicken.

But that’s probably not that important. Nowhere Is Home is a mid-paced, pleasant enough acoustic strum, with Kevin Rowland crooning over the top like he’s never been seen wearing ladies’ clothes in public.

But, it is nowhere near as good as that one about that darts player. Or that one about what Eileen does to make ends meet. What? No, our ignorance has never cost us anything. As far as we’re aware.

Okay, so it doesn’t have quite the lapel-grab of Take Me Out, but it’s not a million miles away either: this pop-pursuing Scottish quintet might just have something of the breakthrough on their hands.

Gotye – Easy Way Out
Somebody That I Used To Know took an awfully long time to top the charts; seven-and-three-quarter years, to be exact. Extrapolating said timeframe against recession-era chart coefficients, we expect this follow-up number to peak at number five… in June 2017.

The Civil Wars – Sour Times
It’s not for no reason that The Civil Wars are flavour of the month. One looks like Johnny Depp and the other one looks like a country version of Elvira you could safely invite round for tea and biscuits (Fox’s Classics, probably). Besides, a highly-publicised Grammys performance probably didn’t hurt their burgeoning cause.

But this is what really matters: an acoustic take on Portishead‘s Sour Times that perfectly encapsulates the original’s forlorn ache. Additional harmonies thrown in at no extra cost.

Marilyn Manson – No Reflection
Brian – you don’t mind if we call you Brian, do you, Brian? – it’s been a while. Three years, in fact, since The High End Of Low, an LP we had to look up on Wikipedia just now. But check this out – your eighth album, Born Villain, is due at the end of April. Best shine up those two-foot PVC stilettos real nice.

While we’re on the subject, Brian, we like the fact that you’re so very droll (no eyebrows? No problem!) but No Reflection is just a touch tiring, don’t you think? To our ears it’s Fight Song as interpreted by a croaking asthmatic. Let’s just come out and say it: Brian, you sound like Sickness-era Disturbed. Live in the now, man.

Breton – Interference
Don’t get us wrong, the new track from Breton is really ace. Stuttering and brassy, it’s a bit like someone has deconstructed A View To A Kill (by Duran Duran) and then hammered the pieces back into a template half-inched from Daft Punk‘s ‘to be finished’ drawer.

But while we’re watching the video our critical faculties seem to be waylaid. All we can think is: my God. That man’s neck is incredibly thick. It’s like a sequoia. Wow.