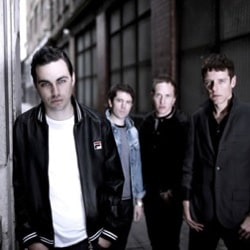 Equally expectedly, after last week’s unexpected love-in, is a tracks selection that returns (at least partially) to a position of vitriolic bile-flinging, like an unreconstructed ape with acid reflux who has just spent the weekend watching The Exorcist. Oh dear.

Hard-Fi Good For Nothing

It’s hard to imagine a world where Hard-Fi don’t exist. We’d like to, in the same way that we’d like to imagine a world without pestilence or war or disease, but the grim reality of the situation is as immovable as 14 tons of breeze blocks nailed to the Hoover Dam: these things exist, and so do Hard-Fi.

Good For Nothing is a predictable return from a predictable band who do predictable things such that their audience can listen to precisely what they were predicting before hitting the town and going predictably laaarge.

All the exotic videos in the world can’t change the fact that as songs go, this is more than a bit Danny Dyer. With particular emphasis on the dire.

Nothing. Nothing. The word is nothing. Not nuffin’.Stephen Malkmus & The Jicks – Senator

And while his post-Pavement solo and Jicksy efforts haven’t exactly been a coronation – with the honourable exception of a glut of mini masterpieces including Vague Space and Animal Midnight – the prodigious Anglophile is never short of a trick or two.

Cue Senator; Embassy Row’s spiritual successor and an indicator that his forthcoming LP may just scale the heights of its ageing predecessors.

We’re not generally fans of surreal videos – being confused and confounded at the best of times – but every so often visuals arise that stop us in our tracks; gobsmacked, enchanted, mesmerised, like Michael Moore discovering Greggs for the first time.

The video accompanying Memory Tapes’ stunning Yes I Know is one such example, simultaneously the most beautiful and unnerving thing we’ve ever seen. Dayve Hawk, man behind Memory Tapes, may well have a name like a renegade cop from the wrong side of the tracks, but it’s a name to keep a very close eye on ahead of his imminent sophomore release.

Orcs dancing in a mine. That’s what we immediately thought of when listening to the breathy electronic atmospherics of Data Romance.

And ‘lo and behold, that’s exactly what we’ve got. Look at them, throwing shapes like this is Helms Deep’s Got Talent, delight etched across their faces.

The song is rather good as well. The forboding synthesised claps and breathy vocals edge into your conciousness to provoke the same sort of nagging doubt you have when you’re miles from home and worried you’ve left the gas on, only with a much better beat.

It’s a yes from me, how about you David Hasselhoff?

We love Grinderman. We love animated videos. And we love Mickey Mouse. So you can imagine our delight when we stumbled across the following. It’s sort of not suitable for work, unless you work in the kind of office block where sucking milk from a stalactite teat is OK. And remember, had it been on the floor, it would have been a stalagmite teat.

The song, you probably know. What you probably haven’t heard is the Josh Homme remix, which playfully turns the rock and the roll into the musical equivalent of being interrogated in a Russian gulag. Except fun.

If we were rich, we’d be miserable too. We’d pay for those sousaphone lessons we’ve always wanted and blaze the trail of the next big thing – sousa-hop fusion – before spiralling into an ultimately fatal vortex of guns, girls and tax evasion. Oh, and we’d completely neglect to pay off the crippling debts that keep us peddling our blotchy assets to lonely businessmen night after night.

But hang on: Chamber popping Brighton five-piece Will, James, Mike, Jim and Rhys don’t appear to be particularly miffed. In fact, on the evidence of Anything’s Possible – a terrific number inspired by the late, great John Barry – they’re not miserable at all. How very misleading.

And what should we do with your bog-standard music video trailer. Review it? Isn’t that a bit meta-criticism? Should we tell you about the song, which incidentally is nowhere near as good as Firework? Should we do something else entirely?