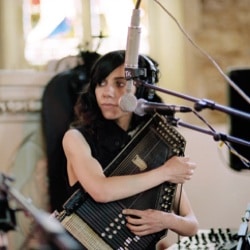 In the middle of the night. I go walking in my sleep. Through the desert of truth, to the river so deep. We all end in the oceans. We all start in the stream. We’re all carried along. By the river of dreams.

A word of advice to you all: if at the end of a job interview you’re asked if there’s anything you’d like to add, don’t recite the lyrics to River Of Dreams in faux-dramatic style, placing additional emphasis on the last word of each line.

This week, aside from learning hugely useful life lessons, celebrating the retirement of Phil Collins (we’re coming for you next De Burgh!), musicOMH has also been tracking the tracks. For you. Just you. And this is what we’ve found. You lucky people…

Hmm. It’s hard to come up with a compliment that hasn’t yet already been levelled at Let England Shake. So sticking this as track of the week is a little bit like giving a diamond encrusted, platinum clad lily a quick gild, just to tidy it up.

It’s a playful sweet nursery rhyme, that just happens to speak of deformed children, with a simple playful melody, that just occasionally is hit by a off-kilter sample of a military bugle.

There’s also a sparse, perfectly matched video, that manages to be both homely and off putting at the same time.

Haven’t we gone through this rigmarole already this year with Lady Gaga‘s Born This Way? You know the drill – seemingly provocative video segues into the most vapid of pop constructs. But hair-whipping Willow Smith is taking the formula to new depths.

Having grown from the sands of a desert oasis, you see, young Willow proceeds to create a cityscape from the dusty plains by drawing from the ground an electric guitar, a skateboard and… a row of parking meters? What sort of 21st Century girl have you become, Miss Smith? These fancy pants music video producers are taking liberties; leave Willow alone!

If you are looking for proof that God hates us and wants us to be miserable, ladies and gentlemen, we give you the Black Eyed Peas.

And they give us yet another single, constructed in such monotonous, identikit fashion to all their previous 800 releases (this year) that you can’t help but wonder why Will.I.Am doesn’t change his name to Will.This.Do.

Christ, it’s bad. There’s a vocoder. There’s the vague hint of a sample from a much better song, and then there’s Fergie. Caterwauling like she’s being spayed.

Add that to its inevitable ubiquity at every office party, high-street bar and sodding, bastard ring tone from now until the end of eternity, and it leaves you with no doubt: we are not loved by Him.

You already know Adam Goldberg. No, seriously. He was one of Private Ryan’s rescuers, and – more importantly – Chandler’s irritating flatmate Eddie in Friends. “See ya, pal!”

What you may not know is that he’s also a knob-twiddling muso with talent up the wazoo, as the saying goes. Shush is a later John Lennon-style stomper with a thick fug of authenticity and a cracking one-shot video in which Adam looks like a manic Alfred Molina. Bliss.

Awww. They’re so young looking. Watching the video for Still Here, you’re left wondering whether it’s actually the new single from the ‘future of music’ / ‘the first band in ages to have bollocks’ (which does seem like an anatomically inaccurate boast), or an advert for the teenage section of the Next catalogue.

Look at his lovely blue duffel coat! And his little buttoned-up shirt. Aw. The rosy cheeked little oik. Gritpop? Nah. They just want someone to ruffle their little heads and send them on their way with a clip around the ear.

So Aussie newcomers Cloud Control think there’s nothing in the water we can’t fight, do they? That statement may apply to the sissy ocean life skulking around their pristine antipodean coastlines, but Cloud Control clearly haven’t been to one of Britain’s many indoor water parks. Even the toddler pools have their hard cases.

But we’ll not hold the band’s ignorant bravado against them. We’ll instead enjoy their riveting new number that postulates an answer to the question: what would The Shins sound like if they came from Ramsay Street? Minus the Lou Carpenter guest vocals, of course.

Nottee – Don’t Waste Your Light On Me

When hotly tipped Nottee revives the Ace Of Base formula to molecular levels of accuracy with Don’t Waste Your Light On Me, however, it’s more than a little tricky to prevent the words from writing themselves.

As for the track itself, it’s a real smorgasbord of sound, evoking saunas, this midnight sun and gorgeous blonde temptresses; reviving the Ace Of Base formula to molecular levels of accuracy.