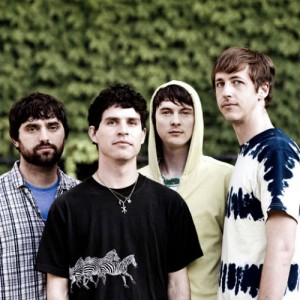 Do you know what Grimes, Ben Folds Five, Animal Collective and Neneh Cherry have in common?

Did the artwork for their last album give us motion sickness? No. Does the merchandising stand at their gigs sell rings shaped like an intimate part of female anatomy? No. Do they all stand in a buffalo stance? No.

It’s far more simple than that. They’re all present and correct below, in this week’s tracks round up. Bet you feel stupid now.

Clanking percussion, bleeps, hypnotic rhythms and a chorus that buries its way into your brain and stays there for a very long time. There’s admittedly not that much progression from Merriweather Post Pavilion, but there doesn’t really need to be when their music is this compulsively odd.

Honeycomb is backed by Gotham, which is a more laid back, less frenetic affair, but no less wonderful. They’re both the sort of tracks that you discover something new in after multiple listens. It’s good to have them back.

Grimes ft Majical Clouds – Nightmusic
Single number two from album number three from the lady we keep bumping into everywhere at the moment, and you know what? We still don’t have a clue what she’s saying.

Not a clue. But it doesn’t matter. As she mumbles like a goblin whispering into a hurricane, the rest of Nightmusic rolls and pulsates like a calming ethereal balm across our weary brow. It makes us long to run into the forest and roll about naked in the dirt.

Just like the folks in the video in fact. It’s clearly catching. And clearly freezing.

Ben Folds Five – Do It Anyway
You can stick your Stone Roses, bin your Garbage, and rest easy on your Black Sabbath. The reunion that all the cool kids are excited about this year is none other than Ben Folds Five.

Do It Again is the first fruits of the trio’s follow-up to 2000’s The Unauthorised Biography Of Reinhold Messner, and it’s impossible not to be slightly wary. Can the quintessential champions of high school nerds still sound even slightly relevant in 2012?

The answer is, thankfully, yes. From the first burst of Folds’ piano, it’s impossible not to listen to Do It Anyway without a surge of excitement, and when Darren Jessee’s drums kick in, you’ll be pumping the air with glee.

Neneh Cherry & The Thing – Accordian
Neneh Cherry and a Scandinavian free jazz trio cover a MF Doom song. To be fair, when you say it out loud, it sounds a bit unlikely. It sounds less like an actual reality, and more the output of a conversation with a man who’s drunk a bottle of Windowlene.

But no. It’s happened. It’s there. And it’s bloody good.

It sounds totally meant to be. In fact, as Cherry gently croons “Dick Dastardly and Mutley with sick laughter” and a sparse, precise bass darts one way and a gently lilting saxophone darts the other, with the control and slow purpose of someone removing a plaster, you wonder why you ever doubted it.

DIIV – Doused
DIIV used to be called Dive. But they changed their name out of respect for the letter e.

Actually, we lie. We jest. They actually changed their name out of respect for a Belgian industrial band from the early 90s. The man behind DIIV – Zachary Cole, sometime Beach Fossil live guitarist – doesn’t give a shit about the letter e. He thinks it’s a vastly overrated letter, living of past glories, and never really pulling its weight.

We agree. And we adore Doused. An atmospheric, echoing heavy, driving throb of a song. Threatening, pounding, driving. It makes us think of highways and headlights and black and white photos and The Raveonettes.

Passion Pit – Take A Walk
Part of the wave of 2009-era bands who relied on synths and beats instead of guitars, Passion Pit seemed to disappear as quickly as they arrived. Yet now, they’re back with a song about… the state of their finances.

Yes, musically they may have not changed too much – there’s a big, squelchy chorus and a sound that you can imagine blaring out of every indie club in the land – but Michael Angelakos seems more concerned with his pension these days.

“My partner called to say the pension funds were gone, he made some bad investments…its this loan I think I borrowed just too much…”. whatever next? Beach House complaining about the state of the Dow Jones?

CocoRosie – We Are On Fire
Not literally, they’re not. That would be hideous. But metaphorically, the Casady sisters are indeed on fire at the moment. Indeed, there’s an argument to be had that We Are On Fire is the best thing they’ve ever done.

Due to the introduction of Dave Sitek as producer? Maybe. The TV On The Radio man has transformed the sister’s experimental folk into a weird, eerie trip-hop masterpiece, with Sierra Casady sounding like a cross between Bjrk and Beth Gibbons.

It’s all rather magnificent, and serves as an exciting taster for the duo’s upcoming appearance at Antony Hegarty’s Meltdown Festival this summer.

This Many Boyfriends – (I Should Be A) Communist
Ryan Jarman‘s a busy chap. As well as unveiling a rather brilliant new Cribs album this month, he’s also produced fellow Yorkshire tykes This Many Boyfriends’ new track, which feels very much like a passing of the torch.

As with most of TMB’s output, (I Should Be A) Communist should be prescribed by doctors as a pick-me-up. It’s just one of those songs that plasters a big grin over your face, especially when Richard Brooke wails that “I should be a Communist, I tried but I was far too decadent”. You’ve probably guessed by now, that this isn’t a devastatingly social and political critique.

There are undoubtedly massive nods to The Smiths here, especially in Brooks’ delivery, and there may not be anything too revolutionary (Ha – geddit?) going on. It’s just more big, fun guitar pop from West Yorkshire.

Jake Mattison – Sorrow
You’ve probably had enough of bluesey singer-songwriters by now. One grizzled yet sensitive man and his acoustic guitar – it’s all becoming a tad clichd now, isn’t it?

Except if you ignore Jake Mattison, you’d be making a big mistake. Mattison, from Manchester, has a voice sent from the heavens, a big, rich instrument capable of rendering you speechless while just staring at your speakers.

His debut single is pretty startling as well, sounding like the best thing Ray LaMontagne never recorded – a big, epic yet strangely intimate sound which promises big things for the future.