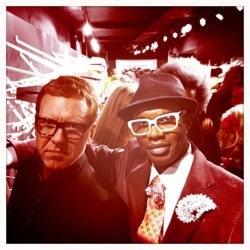 By the time you read this, The Stone Roses may have reformed. Steps may well have sold out a second date at the 02.

Which proves two things. One: while money may be the root of all evil, it is definitely handy when it comes to paying the mortgage, or buying food, or clothing your naked form, and two: 40,000 people can still be wrong.

Harmless nostalgia? The relentless sonic and journalistic journey that we here at musicOMH are on rarely cares to return to the site of former glories. We never decide that the road ahead is so overgrown that our machete of truth cannot hack through to find the path of originality.

But we do reserve the right to reuse the same jokes.

The opening three seconds of I Wanna Rise, the first single from David McAlmont and Guy Davies new band Fingersnap, sounds like a tragedy. Circa 1998. Circa doing that stupid dance at a wedding like miming a box having been jammed on your head. Those first two beats, that first arc of sawing strings and there you lie, in a lost and lonely part of town.

But if you happen to be overcome with an unstoppable desire to introduce your fist to your ear in that brief period, do try and stop. Because it gets better. It becomes the sort of shimmery soulful thing you can imagine (politely) blasting out over the speakers of the yacht while elegantly dipping your toes in the on-board jacuzzi.

Which is ultimately the problem. Because the jacuzzi on our yacht is tiny. And to be reminded of that in such a fashion is just so cruel.

The Saturdays My Heart Takes Over

It looks amazingly windy in this video. Astonishingly windy. Beyond what you might imagine the director had in mind when they were sat around the expensive table in the expensive design studio, discussing what kind of complex visual metaphor they could crowbar in to promote this ballad. (A BARREN HILLSIDE! BRILLIANT!).

It almost smacks a bit of “We’ve come all this way, you’re all inappropriately dressed, I don’t care if it’s a hurricane or not, the look we were going for was ‘wind-swept’ so it’s perfect.”.

So label this a windy ballad from England’s favourite girl-group. Until either Girls Aloud reform, the Spice Girls reform or 2-Shoes land that major label deal.

Confession. The initial reason for giving this a listen was because of a slight misread. The belief was this the new single from Spoon, called Boris. Which then lead to some severely furrowed brows when it was then played.

Son Of Dave Ain’t Nuthin’ But The Blues

We do like Son Of Dave. We do. But when we hear him our minds dart in one of two distinct directions either: Tom Waits‘ younger, goofier, less grizzly brother, or, an outtake from the opening sequence of Rolf’s Cartoon Club. The infamous one where Rolf rocked up at 9:00am having imbibed half a bottle of methylated spirits and drunkenly lost his coat in a bet with a tramp about whether or not he could hit a pigeon with his shoe.

Look. Here. You’ll obviously have to find your own tramp, meths and pigeon, and plead for Rolf to recreate it, but you get the idea.

The D Too Insistent

The D? The Dh? The d d d a dh dh dh? You have no idea how long that sentence took to construct. It’s writing like that which really keeps the wolf at the door.

A-n-y-w-a-y, the new track and lead single from The D’s new album, is immensely pleasant in a kooky, floaty, folky way. Apparently they’re French/Finnish, and it’s always nice to see our European neighbours getting on so well that they’re even prepared to start bands together.

There’s something quite likeable about Middle Child Syndrome. It’s got a bit of a skulk about it. Like it spends some time hanging around darken streets serenading streetlights from the depths of its woollen peacoat.

And it’s always the quiet ones you need to keep an eye on.

Well. Well. Well. Ryan Adams has been a lot of things, but it’s hard to imagine the last time you could label him as settled. Happy. Content, even.

And this is the sort of song you’d imagine a happy, settled, content Ryan Adams would make. A little bit country, a little bit rock and roll, it’s pleasant and moving, but not desperately memorable.

Of course, the true test of Adams’ new found serenity will come at the next gig where someone requests Summer Of 69.