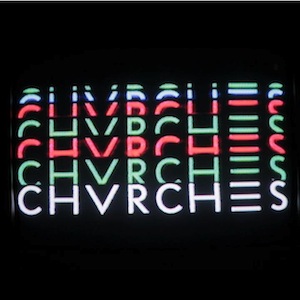 It’s all gone a bit gloomy, hasn’t it? There’s no Olympics to cheer any more, the skies have turned grey and cold, Saturday nights have returned to The X Factor and Strictly Come Dancing equilibrium and we’re currently debating whether the heating should go back on. Yes, summer is well and truly over, and we’re now on that long, trudging road towards Christmas.

But cheer up! It’s not all bad. We’ll always have music, won’t we? Like these here tracks, especially picked for your listening pleasure. Well, some of them anyway….

TRACK OF THE WEEK:
CHVRCHES – The Mother We Share
CHVRCHES used to be called Churches, until they presumably discovered that anyone Googling their name would mainly retrieve historical religious buildings. So, in a bold move rivalling tUnE-yArDs‘ maverick attitude to capital letters, they’re now CHVRCHES, which may guarantee hits if annoy proof readers.

Luckily, The Mother We Share is far more accessible than the rather fiddly name. It’s bright and bouncy synth pop with a terrific vocal from Lauren Mayberry, and it’s easy to imagine it becoming a massive hit over the Autumn.

OK, it may not be the most original song out there (indeed, Anthony Gonzalez of M83 may wonder whether someone’s leaked a previously unknown song of his once he hears it) but when it’s done as expertly as this, it’s impossible to resist.

Tu Fawning – Wager
Caustic. It’s caustic, we tells you. Scabrous. In a good way. The way the drums roll, the way the voices wail, the way the guitars clang like they’ve been hewn from brass and someone isn’t playing them, merely smacking them off a neolithic pillar, oh the new single from Portland’s Tu Fawning is a gothic, bloodstained treat.

It grows from a creepy beginning, all spindly reverb and sepulchral cries to two almighty climaxes, as everything swells and becomes more complex, before voices are joined in a choral ending which sounds like the sermon at the end of the world.

There’s a hint of the Arcade Fire, if Win turned round to find his entire band had been eaten by The Bad Seeds.

Ellie Goulding – Anything Could Happen
Although she’s not quite embraced the full on bleeps and ‘breakdowns’ of her paramour Skrillex, there definitely seems to be more of an electro influence on Goulding’s new material.

Anything Could Happen, the first single to be taken from her upcoming album Halycon, is underpinned by a ridiculously bouncy synth, and has a little instrumental section after the chorus that will either have you singing along or reaching for the nearest hammer to smash the speakers. Still, on the bright side, unlike Goulding’s last track there’s no sign of Tinie Tempah rambling on about Gaviscon.

Trust – Dressed For Space
Had Trust’s new video been sent to Boots for development then it would have come back covered in those passive-aggressive grey stickers: ‘Out of focus. Try and focus on your subject next time. Prick.’ Actually, of all the people whose lives have been ruined by digital photography, it’s the sarcastic sticker advice giver who we feel for the most.

Dressed For Space is great though. It pulsates and throbs and sounds a bit like It’s A Sin crossed with Personal Jesus, but with a languorous crooner doing the vocals rather than a portentous baritone or an impassive observer.

AlunaGeorge – Your Drums Your Love
AlunaGeorge (not, as you may think a solo singer, but a duo consisting of Aluna Francis and George Reid) have been quietly building up a reputation for themselves as purveyors of classy, mournful pop, much in the mould of the likes of Niki & The Dove.

Your Drums Your Love is underpinned by a longing that sounds impossibly affecting, especially when accompanied by the oddly poignant video. There’s some gurgling synths, some dubstep-lite beats, and floating above it all, Aluna Francis’ feather-light vocals, sounding all the more melancholy for just sighing the lyrics out.

If you like music to dance to while feeling sad and woeful, AlunaGeorge could well be your favourite new band.

Robbie Williams – Candy
Which Robbie? The Robbie who can send pretenders like Olly Murs scattering back to the reality shows, or the Robbie who thought it was a good idea to record Rudebox?

Well, going by this, it certainly appears to be the former – Candy is the sound of a man full of confidence. It’s insanely catchy, full of brass hooks and with a chorus that you’ll be hear from now until doomsday. It is, for want of a better phrase, ‘proper pop music’.

It’s accompanied by an utterly ludicrous video in which Robbie chases Effy from Skins along a street while being run over by cars, punching old women in the face and, eventually, being set on fire. We have no idea what it means, but we think we like it.

Martin Rossiter – No One Left To Blame
Remember Gene? Unless you’re of a certain age or have an encyclopaedic knowledge of post-Britpop bands, it’s unlikely. But anyway, Martin Rossister was their Morrissey-worshipping, bequiffed lead singer.

And once Gene split up, Rossiter seemed to disappear. Until now that is, for the forthcoming, superbly titled The Defenestration Of St Martin, is Rossister’s first recorded output since Gene’s dissolution. Judging by No One Left To Blame, it could be a bit special.

It’s a gorgeously melancholic ballad, simply arranged for just Rossiter and piano, and he sounds just as good as he did in Gene’s heyday. Whether the rest of the album will be as stark and beautiful as this remains to be seen, but this is certainly one of the more welcome comebacks of the year.

Ruby Goe – Sq1
Apparently Ruby Goe has picked up the offbeat pop baton. Which got us thinking. What shape would an offbeat pop baton actually be? And can we actually organise some kind of event where said baton is passed between a series of bands? With sufficient entries we could even make it a race.

Anyway, Sq1 is definitely offbeat. And slightly robotic. It really does remind you of the precision engineered cyborg-pop that the likes of Robyn turn out. The kind of thing which at cursory inspection seems icy-cold and emotionless, but then offers glimpses of wounded humanity underneath that hard titanium exoskeleton.

Oh, and worth knowing, it does take a few goes to get it. It’s not a first-time, instantaneous hit. But after a while it gets right under your skin such that no amount of scratching can shift it.

Wendy James – You’re So Great / It’s Alright Ma
So that’s Wendy James (from Transmission Vamp) working with James Williamson (from The Stooges) and Jim Sclavunos (from The Bad Seeds and Grinderman), to cover tracks by Sonic’s Rendezvous Band and Bob Dylan.

That is quite a lot of information to take in. But we’ll tell you something for nothing: Dylan has never sounded snottier. There’s something life affirming about what they do to It’s Alright Ma. It’s like someone scrawling a great big moustache on the Mona Lisa.

The change to You’re So Great isn’t quite so enormous, being happy enough in sugar-coating the original to something slightly more poppy without losing the live-fast, die-free, fuck-you sense of nihilistic authenticity.