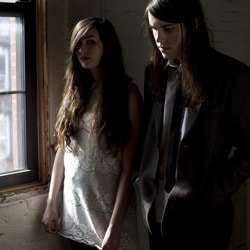 Confucius say, “Holy Christ, it’s mid-July already”. Well. Not really. Given that he’s dead. And he wouldn’t have taken the Lord’s name in vain, given that the Lord was still about 500 years from being born.

But still, the days, the weeks, the months, they all go sailing by. Fitful, fleeting, but full of song. Some of those songs are good, and for them, the passing of the time seems rapid. Those three, four minutes disappear in a joyous daze.

Some of them feature N Dubz, and for those, the time is more like a sentence. Each one dragging out for a horrific, interminable age; seemingly long enough for evolution to make several perpendicular diversions, sprouting us additional limbs, third eyes, flaps to cover our ears, and other hilariously over-the-top physical extras with the view to advancing our species.

But thankfully, not this week.

There are promos, and then there are promos. Like a sinister version of Spike Jonzes seamless integration of Weezer into Happy Days, Go Outside sees 2011 hot shots Cults embark on a trip to South America from 1970s USA. Exact destination? Jonestown, Guyana. Yikes.

The benefit of hindsight lends a distinct chill to the initially joyous footage and the blissful track, too throughout an indelibly poignant three minutes for which Cults and their co-conspirators deserve a hearty pat on the back.

Once, a few years ago, a friend of ours showed us a film called Teeth. If you’re male, and of a sensitive disposition, it’s fair to say it isn’t high on the list of films to see before you die. Also, if anyone suggests it for a movie for a first date, run. Quickly. Away. With your legs crossed.

Slightly less emasculating, but only slightly more fun, Teeth’s new single, Care Bear is what would happen if you wrapped Crystal Castles in feather boas, rolled them in glitter, and told them that their new favourite word is throbbing.

Whatever it is, The John Wayne, the new single from Little Green Cars, displaying a surefooted grasp of folky, strummy, acoustical whimsy (with added broken-heartedness and lashings of harmonies), has embed itself in our consciousness and is refusing to shift.

Particularly the bit at the end, where it swells, the drums pound and the chorus reaches a crescendo. That’s the bit where we tearfully reach for the mouse, and queue it up for the sixth time in a row.

For years now, we have suffered with a very particular type of insomnia. It is the insomnia caused by not knowing exactly what 12 litres of acid rain destroying a polystyrene paradise looks like.

It is a problem. Anyway. What’s this? The new video from Blanck Mass. Blanck Mass is Benjamin John Power, one half of Fuck Buttons, and he makes moody ambient electronica in thrall to Ennio Morricone.

We dont imagine this Portland quintet would be quite so cheerful if they actually trapped Blitzen: just imagine answering to the wrath of Santa, never mind having to hold your own against the likes of the RSPCA, PETA and David Bellamy in the subsequent media storm.

Fortunately, hunting skills in their case prove to be inversely proportional to musical ability: American Goldwing sees the band further hone their retrospective recital with Canterbury scene-style changes and everything! in a handy preview of the forthcoming album of the same name.

The Joker & The Thief I Do Too

We were convinced that Silent Library was a documentary rather, not merely a frivolous imported game show; our local library is frequently home to bouts of disruptive horseplay, muted celebrations and disgusting eating habits. The Joker & The Thief, on the other hand, take the biscuit. Imagine trying to work your way through the latest Steven Pinker with that racket going on.

In fairness, their chaotic construct is immediately endearing few other bands would let timing come and go as it pleases and the ad hoc visuals register a million miles from the latest million-dollar polished promos elsewhere. Seven overdue haircuts out of five.