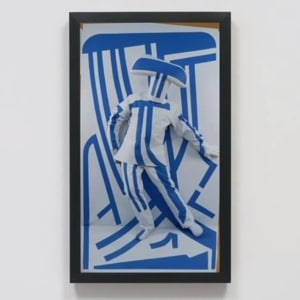 People say schadenfreude like it’s a bad thing. But when Pendulum announce that they’re splitting up, you can prod the people and ask, really? Really? What about now?

Then again, literally the same morning, you hear that the Red Hot Chili Peppers are going to release 18 new singles in the next six months. Wow. We haven’t seen such a waste of vinyl since an emailed order to Snoop Dogg‘s tailor for a dozen pimp suits was ruined by a single misplaced key-stroke.

Pet Shop Boys – Invisible
The Pet Shop Boys are back. Or, as Invisible may suggest, they are baaaaaaaack. You see, Invisible is somewhat languid. Slow-paced. Unhurried. It’s almost as if they were asked to record something suitable for playing to those undergoing flotation therapy.

“Here, Neil. Could you do us a favour? We’re big fans of the old band, but the music ain’t no good for piping into those isolation tanks. We tried It’s A Sin but the buggers kept banging their heads on the lid. Thanks love.”

From their new album Elysium, their 11th, it is in no way unpleasant. It’s calming, atmospheric and slightly forlorn. But it’s definitely quite hard to dance to. Ideal, therefore, for enclosed spaces.

Dance For You is well off-kilter. There’s a hint of the vocal and the tune not actually belonging together. A bit like they only met for the first time last night, in a bar, and frankly, can’t remember what happened, and there was definitely tequila involved, and here we now are, naked, and, oh are those my pants over there, and yeah, sorry, is that the time, I *really* need to be making a move, but I’ll definitely call you soon, ahem, bye.

It’s folky, then it’s orchestral, then it’s folky again, and then it ends with a guitar riff which sounds like it was actually played on a stylophone. Ace.

Azealia Banks – Liquorice
Is it possible for a horse to look awkward? Actually, that’s a rhetorical question. Skip to 1:20 or 2:14 and you’ll see a horse looking awkward. With an expression of that suggests it shouldn’t be there. Almost as if it’s the unwilling pawn in a director’s plan to start a craze for equine photobombing.

Which sounds like a brilliant idea. This is Azealia Banks’ new video and the fact it’s directed by Rankin and looks like it cost the gross national product of Bolivia to make should give you some idea of exactly how much of a big deal she now is.

Still, all the leather chaps and suggestive sucking of ice lollies and crushing of hot-dogs (look at all that mustard! COR BLIMEY!) in the world can’t disguise the fact that the song is more than a little underwhelming. Still, that horse has a massive, massive future.

Nguzunguzu – Delirum
That’s Nguzunguzu. Pronounced En-Goo-Zoo-En-Goo-Zoo. Should you be looking to purchase this at your local record emporium and you’re concerned you’re going to have to walk up to the counter and sneeze at the assistant.

Which you should. Look for it at your local record emporium that is, rather than sneeze at the assistant, as Delirum is ace. It sounds wonderfully like the police attending an explosion at a Chinese bubble factory on a planet with a helium filled atmosphere.

Slow Club – Beginners
Thinking back to that most seminal of cultural tours des forces – Harry Potter and the Goblet of Fire – it is curious to reflect on the fortunes of its cast: Emma Watson went on to model for Burberry, Rupert Grint doubled for the risible Ed Sheeran and Robert Pattinson sleepwalked his way through various crimes against cinema (while we’re on the subject, give Cosmopolis a wide berth).

Harry himself became a star-struck fan of Sheffield’s Slow Club, interviewing the band with giddy abandon before featuring in the video for the Paradise LP’s rather excellent Beginners. Admire DanRad’s intensity, commitment and questionable hygiene in three, two, one…

Summer Camp – Always
The sun may be shining (somewhere, anyway) but the great and good of British popular music are becoming ever more cadaverous. Just last week we witnessed Two Wounded Birds leading some poor sod to the middle of nowhere before shivving him with extreme prejudice; this week, Summer Camp kidnap a similarly unfortunate geezer, drive him around in a vintage VW Camper and, eventually, do away with him.

It is cruelly ironic that the murderous release of New Order-ish Always could mean Jeremy and Elizabeth are behind bars by the time their Always EP flies off the shelves this summer, but look on the bright side: they could do a Beach Boys/Charles Manson and hit the charts in 2042 years with Luca Rocca Magnotta in tow. Don’t bet against it.

Ultraísta – Static Light
Joey Waronker became something of a drumming cult hero on Beck‘s Diamond Bollocks; a heroic, skin-thrashing performance that has to be heard to be believed. Add producer extraordinaire Nigel Godrich and multimedia art student Laura Bettinson (she studied sculpture at Saint Martin’s College, to quote old Jarvis) and you have a feast for the senses in Ultraísta.

Static Light is just what you’d hope for from such a trio: a percussion-rich, deftly-mixed and utterly gratifying micro-masterpiece that comes across as a female-led Radiohead. Should a long player follow in due course, the world would be a slightly better place. Probably.