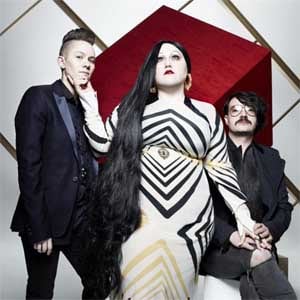 We’re often told* that we’re an awful lot like The Boss. His keynote speech at SXSW this week – an eloquent, heartfelt and poetic love letter to the good denizens of pop – encapsulated the Tracks credo we’ve nurtured over the last year and more: great music by good people, discussed with the care and attention it warrants. “We live in a post-authentic world”, he said, our solidarity confirmed in our bemused frowns and quick-beating hearts: we too were born to run (our mouths).

Yet, try as we might to espouse blue collar wisdom in the music industry’s general vicinity – selflessly, passionately, grammatically – we acknowledge that we’re just as often like the week’s other headline-makers, One Direction: bed-haired, unjustifiably smug, the gas tank of our talents running on fumes (Marlboro Red, mostly).

So when you flip the Tracks coin, you can never tell whether you’ll end up with the heads of profundity or the tails of inanity (quite frankly, neither do we), but, whatever the result, there are play buttons to click and pretty visuals to gawp at. Win-win.

Gossip – Perfect World
A full year of listening to only ABBA can have potent effects (Exhibit A: your parents), and for Beth Ditto it has facilitated Gossip’s ongoing departure from their punk-heavy roots. Keep half an ear on Perfect World and you’d be forgiven for thinking it was a non-too-shabby Kelly Clarkson effort.

Death Grips Lost Boys
It’s brilliant when things unexpectedly come spearing out of left-field and broadside you. Except when you’re driving. Then it’s rubbish.

Towards the end of last year, Death Grips’ Ex-Military LP did exactly that. A visceral hellish thrill-ride through an post-apocalyptic industrial landscape with a maniacal preacher as a conductor. If you haven’t already downloaded it (it’s free, go Google) then frankly we don’t want to speak to you, don’t want to be your friend, and would appreciate it if you returned our porcelain serving dish as we appear to have totally misjudged you.

Lost Boys is from their new album (The Money Store) due out in April, and does nothing to make you think the new won’t be the equal of the old. It floats like an electrical storm and stings like a massive, angry, wasp. With a hammer.

It leaves you agape in sheer unbridled terror. Excellent.

The Horrors – Changing The Rain
We haven’t the foggiest what’s going on here. It appears that The Horrors have breathed new life into one of Skying’s best tracks by combining Jamie Hewlett’s Gorillaz visuals with Robin Pecknold‘s extraordinary The Shrine/An Argument production – perhaps our favourite video of 2011 – and throwing in some Captain Planet-type plot for good measure. Psychedelic, man.

One Little Plane – She Was Out In The Water
We’ve a lot of time for Kieran “Four Tet” Hebden. We’d built a shelter with his albums; a refuge with his remixes; a haven with his improv. We’d drink his bathwater. Figuratively speaking.

So his involvement with Katherine Bint’s second album – now performing as three-piece One Little Plane – is music to our ears, quite literally in the case of She Was Out In The Water. It’s a elegant paean to nature, it registers in the same range as Juana Molina – another Hebden co-conspirator – and, with Colin Greenwood’s bass lines, comes off with the simple beauty of Radiohead‘s more serene moments.

The Chakras – Build Me A Swan
As we’re all very well aware, the concept of chakra originates in Hindu texts, as featured in tantric and yogic traditions of Hinduism and Buddhism – that much is obvious – but there is also The Chakras: London-based Dubliners whose ’90s-oriented debut Build Me A Swan was cordially received late last year.

Its second single and title track is something somewhat soaring – already compared to the likes of The Verve and Doves but more akin to Scarlet‘s Independent Love Song to our ears – and comes complete with a video that could only be described as an extremely stylish nervous breakdown next to Stacey Slater’s pitch in the Eastenders market.

Imagine Friendly Fires, should someone have made them slower and richer and deeper and classier and less prone to uncouth frantic hip-shaking and more prone to laying you down, dimming the lights and getting f-r-e-a-k-y. Yeah.

Oh. Anyway. Apparently the Balearic Isles do have a Symphony Orchestra. And they sound nothing like this. Well. I don’t really know where we go from here. Riiight. This is awkward. Ho-hum. Hope someone puts us out of our misery before too much lo…

Plan B Ill Manors
Here’s the thing. You can argue about Ill Manors for a long time. You can point at a lack of subtlety, the sledgehammer way it approaches its subject. You can wheel out a few of the clunky, clumsy pop-culture lyrical references for backup. You can opine that there’s nothing new here, just a mash up of conflicting ideas and opinions over a late 90s rave track.

Or, you can suggest that actually, this is Plan B is actually standing up and eloquently articulating something about the current state of our nation. Something that so far has been left unsaid. You can say this a visceral, jarring uncompromising shot across the bows from an artist who (let’s not forget) sold 1,000,000 copies of his last album.

And therein lies the most important, and the best, thing about Ill Manors. It’s almost guaranteed to provoke a reaction of some sort. That certainly wasn’t true of Strickland Banks.