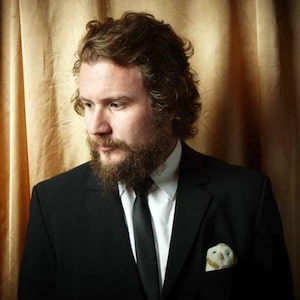 Oh, The Righteous Brothers were so wrong. Time doesn’t go by so slowly. Time speeds past with the velocity of a scalded cat on a buttered floor.

A whole week has gone since we last rounded up tracks for you. So here’s the selection from the last seven days, tamed for your listening pleasure. In the meanwhile we’re off to see if we can find a review of Rhianna‘s new album that tells us whether it has anything to do with Chris Brown.

Jim James – Know Til Now
Jim James is the lead singer of Kentucky experimentalists My Morning Jacket. If you were expecting his solo project to offer him the opportunity to make more conventional pop songs, you’d be wrong. Very wrong. So wrong that we’d have to make you sit facing the corner in a funny hat.

Know Til Now is six and a half minutes of oddness, twisting in all manner of directions. James’ voice is initially buried deep in the mix alongside some clattering percussion, before it turns into the sort of funky jam Luther Vandross would happily spread on toast.

Then, just as you think it may be finally petering out, it ends with what sounds suspiciously like a kazoo. Anyway, it is rather brilliant, and has more invention packed into its lengthy running time than anything else you’ll hear this week. (JM)

Björk – Mutual Core
In the scheme of things, saying you didn’t think Biophilia was amazing was akin to admitting that you thought puppies were rubbish. Or that you’ve got a little touch of the leprosy. But come on. As an experience, yes. Apps, films, inventing instruments, David Attenborough, all good. The album itself? A little patchy. Oh fine. I’ll let myself out.

Still, we can all agree Mutual Core was ace. Blending moments as tranquil as a cup of tea in a Japanese rock garden and eruptions of noise like Aphex Twin after a three hour wait to pay a parking fine. Now, to celebrate the release of the Biophilia remix album bastards it has a reworking from Matthew Herbert and a lovely video.

Herbert’s remix is subtle, but has the effect of making the peaks seem even peakier, with a particularly vicious climax. The video is great. It charts the early stages of a tempestuous relationship between tectonic plates. At first, they’re all over each other, French kissing strata with giddy abandon, but then they realise they’ve got bugger all in common and things go badly, explosively, wrong. (TL)

Azealia Banks – Atlantis
One of the more disconcerting (and possibly made-up) news stories this year was the one which suggested Samantha Cameron is a fan of Azealia Banks’ 212. Call us queasy, but the thought of the wife of the Prime Minister doing the washing-up while singing, and excuse us while we blush, “I guess that cunt gettin’ eaten” was not a pleasant one.

Anyway, Atlantis is the long-awaited follow-up to 212 (it should have been Esta Nochas a couple of months ago, but a legal squabble prevented it seeing the light of day), and while not quite as filthy as 212, it’s got the same sparse, glitchy rush that makes for a compelling listen. And of course, Azealia’s verses are just irresistible.

The major problem is that it’s far too short. After just two minutes, Atlantis abruptly comes to a halt. Still, at least it can’t be accused of overstaying its welcome. Which you can’t really say about the Camerons. (JM)

Blur – Under The Westway
Amazing. A chance to relive the experience of Blur’s Hyde Park Olympic closing ceremony extravaganza. Well. We say re-recreate. Should you want to totally relive that heady evening, you may want to turn the volume down to its lowest audible level, wrap your computer in a blanket and then seal it in a cupboard. Next door. Then erect a complex queuing system in front of your fridge which limits you to one drink an hour.

Then invite all your friends, families and close acquaintances over and pack them into the smallest room in your house. Then really annoy them by starting the evening playing Bombay Bicycle Club.

Willy Mason – I Got Gold
For some mysterious reason, Willy Mason seems destined to remain in the shadows. Now on his third album in eight years, he’s becoming the perennial support act (currently touring with Ben Howard), the recurrent guest star (recently appearing on a Lianne La Havas song), always the bridesmaid, never the bride. Groom. Whatever.

Maybe it’s because his material has always been a bit too quirky and esoteric to appeal to the masses. Oxygen aside, Mason doesn’t do anthems, and I Got Gold is no different. Instead, it’s a shuffling, rousing country-blues anthem, with Mason sounding way older and more jaded than his 27 years even on the seemingly uplifting chorus.

It’s the usual excellent work from Mason but in all honesty probably won’t propel him any closer to finally catching that bouquet. (JM)

Scott Walker – Epizootics!
“Take that. Accidentally. In the bollocks. For a start”. Currently we can’t remember hearing a better line in any song this year.

It’s the “For a start” which nails it. Epizootics! (relating to a rapidly spreading disease affecting a large number of animals at the same time within a particular area, Scrabble fans), is the first track from Walker’s new album Bish Bosch, and there are several things you should know about it.

It is ten minutes long. It has bits which break like the wind (paaaarp). It has bits of steely Hawaiian guitars. It bits which sound like a chorus of insects performing the soundtrack to Halloween. It has little jazzy interludes. Basically it is bonkers, scary and fantastic. (TL)

Johnny Marr – The Messenger
After making his name with The Smiths, then becoming a kind of roaming axe-man for hire (have licks, will travel) with bands like Modest Mouse and The Cribs, the man who many describe as the greatest guitarist of his generation and who Morrissey describes as Johnny Marr, is finally releasing his debut solo album next year.

Lead single The Messenger is full of trademark Marr riffs, more in keeping with his recent work than his more famous ventures. His voice is fine, if a bit anonymous, but the song itself lacks a bit of character and, while perfectly well-crafted, lacks that extra touch of magic that raises it from competent to something truly special.

Marr is a legend, and has earned the right to do whatever he likes. But when you’ve been such a defining figure across music for the last 30 years, it’d be nice to hear him raise his game for his solo debut. (JM)

Hercules & Love Affair – Release Me
Andy Butler’s first record was a cut above most dance albums due to his ability to write a killer hook and the presence of Antony Hegarty, who lent a spine-tingling dose of melancholy to Butler’s disco tunes. Last year’s Blue Songs failed to recreate the magic, due to the absence of both Hegarty and, more worryingly, those hooks.

Release Me would indicate that Butler is back on form. This isn’t a precursor to a new album, but as the sole new H&LA contribution to the Butler-curated compilation album DJ Kicks.

Butler has compared it to Stock/Aitken/Waterman-era Bananarama, but thankfully the reality is a lot less cheesy than that. It’s a a classy slice of dance music that sounds equally good in the living room as it would on the dancefloor. (JM)

Don’t blame it on the moonlight.

Don’t blame it on a good time.

Blame it on Guetta. (TL)