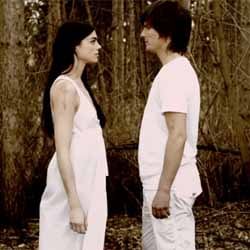 It’s an absolute pleasure to work on the tracks column every week. Our otherwise-wretched fingers become sprightly in thrall to the great and glorious pop entities of the world. Timberlake, Shabba Ranks, O-Town – our comrades and equals, one and all.

But if the filthy capitalists in Whitehall push through their poisonous pension reforms, we would be forced to rise up with something approaching great vengeance and furious anger. No, we can’t write snarkyface reviews until we’re 70. No, we can’t increase our contributions to Dappy‘s dotage fund. No, we can’t survive on a pop pension of three streams and two downloads a week.

We felt that it was time to act – to stand up for our rights. To give The Man what-for. So this week we wrote the tracks column with our eyes closed, just as politicians turn a blind eye to pop writers in peril. See if you can tell the difference.

Like Labyrinth without David Bowie‘s unnervingly prominent bulge, Calgary’s visuals creep from waking in an underground chasm to stumbling through woodland fog, from liquid fire ceremonies to an upside-down frozen bear emerging from the floor/ceiling. It’s essentially an account of our last team-building trip to Kielder.

Make no mistake: Bon Iver’s debut album was magnificent, and its eponymous follow-up is all that and more.

Brian Eno – Bless This Space/Pour It Out

So tired, soul searching. We followed the sounds to a cathedral. Imagine our surprise to find that they were produced by Brian Eno.

Past the gates, quite stark; the roses trimmed and the windows dark. We see the walls through a limestone crack – not red, not blue, not yellow, but black – and all the space is left for you. If the sky was synthesized you’d probably know.

He taught us many things – the wisdom of bleak stratagems, the prophet of a sapphire soul – presented through creative freedoms, and everything we say is true cos if we were telling lies it’d probably show.

We’re simple sorts around here. We like our beer cold and our coffee warm. We like our chicken deep fried, our hollandaise to be prepared as Escoffier demands and our souffls to be twice-baked.

We like our dogs to be Pomeranians and our writing to be joined up. We like our Château Latour to be the ’66, and our exercise classes to be largely based around Zumba. Oh, and we like our bicycles to have no seat. That’s right. That’s how sodding hard we are.

What’s more, we really like our soundtrack to mainly consist of shimmery songs of epic loveliness that sound a little bit like My Blood Valentine tumbling head first onto a mattress of feathers. Silky soft Goose feathers. We like Echo Lake.

Along with suggesting that one song sounds a bit like another song ‘on acid’, poking fun at song titles is amongst the most annoying and churlish of all journalistic traits.

Still. Annoying and churlish are just two of our nicer middle names, so we’ll do it anyway: how much experimenting can you do with a rug? You could nail it to a wall, and let it become a tapestry, but other than that aren’t the opportunities for speculation with any sort of decorative floor covering somewhat limited. More so than say, a cushion?

Regardless, Experimenting With Rugs is one classy piece of pop. With a video that’s like Jean Luc Godard directing Vogue (having told Madonna to lighten the hell up) and a sound that’s a bit like You’re Not Alone by Olive on acid. Shit. Sorry.

Ane Brun – Do You Remember

Sure, it’s disappointing to realise that this isn’t a cover of the Ancient Egyptian-themed Michael Jackson classic, complete with fake kiss (clue: you can see daylight between their lips), but cool your jets: this is grand stuff all the same.

Good old Ane – who looks like she could knock seven bells out of any poor sod who crosses her – has in Do You Remember produced a riotous and slightly demented number that reads like Robyn gone folk.

The non-pyramid-set video is an extract from a movie based on the music of her forthcoming album, apparently, which explains… the costumes? We’re not entirely sure on this one either.

Have you ever put a pan on your head, and then beaten it repeatedly with a metal spoon in time to Feel Good Hit Of The Summer by Queens Of The Stone Age while Liz Fraser from The Cocteau Twins attempts to make you stop? No? Then you should absolutely click on that there link, because until you do, you’ll have no idea what I’m talking about.

Hearts, by I Break Horses (and remixed by Tom Rowlands of Chemical Brothers fame) is like putting a pan on your head and then beating it repeatedly with a metal spoon in time to Feel Good Hit Of The Summer by Queens Of The Stone Age while Liz Fraser from The Cocteau Twins attempts to make you stop. Ah, repetition. The mainstay of the unadventurous, unimaginative and those suffering from amnesia.

Besides, no matter how many times you say it, it is still totally ace.