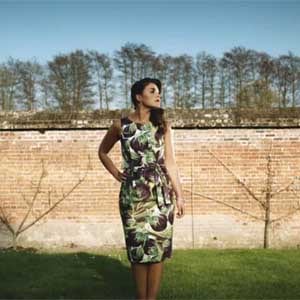 Jessie Ware – 110%
There’s a bit of a buzz about the glamorous Miss Ware: from Jack Peñate backing singer to sometime SBTRKT vocalist, she’s a bona fide rising star of the UK underground. As opposed to its overground. Which is teeming with One Direction and the like.

In 110%, it’s easy to see why the fuss. The minimal chic; the luxuriant pacing; her sultry timbre. We’re even afforded a glimpse at the next big thing – fopstep – as Jessie cavorts around balmy manor grounds and drives a classic sports car verrrry slowwwly. Seven urban cravats out of five.

Only The Horses is an absolutely accurate attempt to sound like David Guetta. Which makes it an absolute abhorrent musical creation. In fact, the only way it could possibly have been worse is if they’d roped in Flo Rida for a guest verse.

Neneh Cherry & The Thing – Dream Baby Dream
Yeah, it’s a cover. But for seemingly the first time in about six months it isn’t someone doing an imaginative ‘take’ on Blue Jeans. For that reason alone, it should be applauded.

Besides, the idea of Neneh Cherry doing Suicide covers is both bizarre and intriguing. And, as it turns out, rather fantastic.

Moonface – Teary Eyes And Bloody Lips
No, silly – not Sophie Ellis Bextor! Moonface is Spencer Krug, the sort of bloke whose jib you immediately admire with a purring, “I like the cut of that.” The title of his debut EP? Dreamland: Marimba And Shit-Drums. His first LP? Organ Music Not Vibraphone Like I’d Hoped. That’s the sort of honesty we can respect in a musician.

Teary Eyes And Bloody Lips sounds a lot like last year’s best and brightest – The War On Drugs, Papercuts, Memory Tapes – tag-teaming with a droll David Byrne sound-alike. Get on it.

Bishi – St George & The Dragon
Bishi is the quadruple threat: singer, musician, DJ and composer. Her ambitious 2007 album Nights At The Circus is her only LP to date, but that’ll change very soon with the release of Albion Voice.

As we all know from primary school history lessons (and Wikipedia), Albion is the oldest known name for Great Britain – which explains St George & The Dragon, a free gift from Bishi to you in celebration of St George’s Day. Imagine PJ Harvey‘s Let England Shake as interpreted by a medieval minstrel and you’re halfway there.

The Leg – Bake Yourself Silly
The Leg’s first foray into the studio resulted in eight tracks dedicated to the Forest of Dean. True fact.

Fast-forward one intervening album – What Happened To The Shrunken Tina Turner? – and various tours and Peel Sessions, and here we are: Leg LP number three, An Eagle To Saturn, and its gratis lead single. Short, sweet, and mad as a box of frogs.

Graham Coxon – Ooh, Yeh Yeh
We’re very fond of Graham’s new album, A+E, but the fact that his solo output now outweighs his Blur tenure in terms of LPs gives us pause for thought. Not much pause, admittedly. And even less thought. But pause nonetheless.

In the very agreeable Ooh, Yeh Yeh, the old Coxonator continues his inexorable metamorphosis into Elvis Costello, plucks a song title from the bucket marked ‘Buddy Holly‘ and exhibits glum curiosity when faced with an empty set of dancing clothes. Natch.

Got it? Think considering your future. Think cool shapes flying at you as you gaze into void of reality and the peyote kicks in, your mind becomes completely blown and you wonder why you’d ever listen to anything else ever again.

White Manna know the transcendental and transformative power of repetition. As do we.

Ren Harvieu & Karen Elson – The Train Song
Given this is neither late, nor expensive, nor overcrowded, nor cancelled and replaced with an infrequent bus, we’d suggest that it is not specifically about trains.

It is however a rather lovely bluesy, jazzy duet between the hotly tipped Ms Harvieu and the ever talented Ms Elson. It exudes the sort of class that you just can’t buy. Particularly in the buffet car of the 13:43 to Newcastle Central.