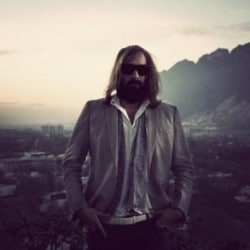 So it appears that we made it through not just Blue Monday but also Dejected Tuesday, Morose Wednesday, Glum Thursday and Disconsolate Friday. Such painful, frostbitten recollections are now little more than a jagged little pill of a memory: having washed it down with an ice cold Spectre White, we’re now skipping merrily towards the effortless, sun-drenched, ragged little meadow that is the rest of 2012.

Okay, it’ll be no cakewalk in a strictly literal sense, but the erstwhile-maudlin Tracks column is positively brimming with optimism: artists worth their weight in gold are slowly but surely emerging from their winter hibernations, banishing novelty acts to the land of Onceayearifthat and reclaiming their rightful place at the very centre of our beating hearts. Well, Santigold is, anyway.

That, there, in that video, is what you’d imagine God would look sound like. Like Gregorian monks. In Studio 54. On John Carpenter tribute night.

Santi White (yes, we’re on real name terms) can do no wrong in our eyes. A debut album built on stone-cold classics like Creator and L.E.S. Artistes; a mixtape with Diplo so good it’s almost obscene; co-collaboration on the Beastie Boys‘ best single in years.

Add to that list Big Mouth. Prelude to sophomore LP Master Of My Make Believe – which isn’t out until the end of April, FFS – this is the unmistakable sound of Santigold going hard. Factor in a promo with all the garish visual effects of an episode of Why Don’t You? and you’re onto a winning formula.

Bruce Springsteen We Take Care Of Our Own

On the plus side, it’s Springsteen, it’s new and it’s not bad.

On the negative side, it’s a bit over-produced. It’d be a lot nicer with a bit more grit and gravel in its veins, a bit more dirt under its nails. And, shouldn’t We Take Care Of Our Own feel like it should be an angrier mantra? A bilious, vitriolic, rant? You take care of your own do you? Do you? You. You… You…

But that’s just us. What it won’t stop is our obtuse and annoying habit of assuming that whenever anyone refers to the ‘big event’ happening in London during July, they mean Springsteen playing Hyde Park and not 205 countries taking part in a glorified P.E. lesson for brightly coloured discs of metal.

Laura Marling – Night After Night/I Was Just A Card

We’re all well aware by this point that Laura Marling’s A Creature I Don’t Know is a thing of rare beauty; a careworn masterpiece utterly at odds with its progenitor’s tender years.

So it’s no great chore to dose ourselves further on two of the album’s most spectacular moments: Night After Night and I Was Just A Card, the former of which is subject of a mesmerising live performance while the latter ascends to greater heights once paired with stunning choreography. And yes, we’re dishing out unreserved praise, but it feels… okay.

Jagwar Ma – Come Save Me

Here’s a little slice of heaven for you: a flaring fusion of dusty, 50-year-old vinyl dance numbers and contemporary house and funk in a track that sounds as if it came into being as the result of a set of unintended yet entirely welcome circumstances.

The video is almost too good to be true in the Phenomenal Handclap Band sense, but the track is more The Count & Sinden‘s After Dark: a pulsating brainworm that starts good and gets better.

Dale Earnhardt Jr Jr – Nothing But Our Love

A burgeoning reputation butters no parsnips (trust us, we’ve tried) but Dale Earnhardt Jr Jr’s upwards trajectory has us keen as mustard. Okay, maybe not that keen. Let’s say keen as piccalilli. Their debut album, It’s A Corporate World, garnered praise Stateside and has a UK release date of May. Roll on Spring.

Nothing But Our Love is a breezy, wistful number that, on this occasion, soars from the Detroit duo’s spot on a London park bench. Plus they ultimately spurn further tiresome sightseeing in favour of a Jurassic Park 3D screening. So, you know, respect.

Jack Peate No One Lied

Has Jack Peate performed another musical volte-face? Well, no. Because he did that last time. And should he do another volte-face that would put him travelling back in the direction he was originally facing.

Which he isn’t. Fortunately. No One Lies is not a return to that Dick-Van-Dyke, sarf-Laaandhn, ain’t-it-luvverly, three-pound-a-pahnd, get-em-while-they’re-hot, awful dancing, cod-reggae, pointless shite that he peddled on his debut Matinee.

But then it’s also definitely not similar to 2009’s ‘rebirth’ Everything Is New. So we’ll call it a musical perpendicular turn. Down a street marked ‘Impassioned’. Really, really impassioned. It’s just got loads of passion in it. Look at it all over his face. Passion. Phew.