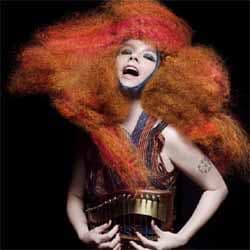 This is the most humble week of our lives. As the great and good send their latest wares crashing down around our heads, we’re barely able to muster a cruel, sarcastic or dismissive sentiment between us. We’ve even had to rope in support: team-mates that have been left with contented smiles every bit as wide as our own. Something is seriously wrong here.

Yet we could never truly thumb our noses at such a stellar week of tracks – even Kanye “KING OF THE CAPS” West gets a much-sought-after tracks column (half) slap on the back – and, on some level at least, we’re happy to shelve the cynicism every once in a little while.

So make the most of it while it lasts, music industry, and remember this splendid magnanimity the next time you drop a Cleveland steamer in our inbox. On with the show!

If you don’t have an iPad, an iPhone, an iPod Touch, or any other direct wallet-to-Apple interface, you won’t be able to access Björk’s state-of-the-art Biophilia app yet. The second track from Björk’s upcoming album (of the same name), Cosmogony, is sold through iTunes as a standalone download, but where’s the fun in that when there’s so much else behind the scenes, and free? So here’s a video explaining the app and the Biophilia concept a little, courtesy of that peerless knight of the realm, David Attenborough:

Lots of little apps nestling within a big Mother Earth app? Mindboggling. And cute as a pail full of kittens. To further explain: the basic premise is the ‘little’ apps are the tracks and the ‘big’ app is the album. This is the first ever 3D, multilayered visualisation of an album.

That new track Cosmogony is on the app (for a fee), paired with the already available-to-download Crystalline. The remainder of the album’s tracks will be pushed to the app as Björk builds up to the album release on 26th September. We hear there’s a deluxe edition of that available for all the gold reserves in the world and that it has an ACTUAL OAK TREE inside it.

If you were unable to witness her Biophilia show premiering at the Manchester International Festival – review here – the app is both the next best thing until the full album comes out and a genuine attempt to push the boundaries of what is possible with an album campaign; even if the new single’s actual music is arguably a little lost amongst all this technovisual derring-do.

Just as well that she’s released a video for the crunkdown that is Crystalline too then, right? If only all mirrorballs were made of Bjrk…

We stand by our take on 2003’s Dead Cities, Red Seas & Lost Ghosts as something of a meandering mess, but the M83 project has since done much to rectify its standing in our eyes: Anthony Gonzalez jettisoned Nicolas Fromageau ahead of 2008’s far more coherent Saturdays = Youth (perhaps he was too cheesy… Hah!) and has now enlisted the production services of the irrepressibly excellent Justin Meldal-Johnson for the forthcoming Hurry Up, We’re Dreaming LP.

Lead single Midnight City renders M83’s directionless noisesmithery as little more than a distant memory, its Kate Bush-esque synth stabs pointing towards an altogether more exciting direction. Either that or he was curious to know what would happen if he squeezed some kittens. We always knew he had it in him.

This loose collective kinda thing have made a single. A debut single, no less. It is called The Death Of You And Me. We assume it’s not about Liam. But is it better than Liam’s music with Beady Eye? Judge for yourself…

Folksy sprite Laura Marling’s third album A Creature I Don’t Know is expected in September. To whet appetites, the first single has been dropped, and it is Sophia. Apparently Sophia is a creature she does know, at least well enough to pen a ditty about her.

Laura’s still only 21, you know. Precocious? Amazing? You decide.

Sometimes you just see a video and you know, even if you were to watch it from now until forever with the director standing over you giving a Powerpoint presentation dissecting each frame in terms of themes, analogies and symbolism, you still wouldn’t get it.

Girls sports team in Marx brother masks chase Joan (in leather trousers) and a man with facial hair that would preclude him from being anything other than a Wolf man or a Wurzel (with strong undertones of passionate attraction between Joanie and lycanthrope/West Country singing farmer) before escaping in a Datsun Cherry.

Anyway, Chemmie is a song so elegantly soulful you can forgive the video, and the fact that it commits the cardinal sin of hanging itself on the invention of a new word.

This week’s mammoth singles round up would somehow not be complete without a song about a fish.

What? No. Of course I read it. What do you mean look again? Why would I need to look again? Fine. If it’ll make you happy, I’ll look again.

Jay-Z, your repeated insistence that you’ve “got your swagger back” has reached such a level that it’s hard not to either dismiss it in the same hand-patting fashion reserved for placating an elderly relative who has been reunited with their favourite hat having temporarily misplaced it whilst having lunch in the gardern “look son”, said through beaming gums, “I’ve got my hat back!” – or a worrying deeply Shakespearian, doth-protest-too-much character trait.

I *have* got my swagger back.

He really needn’t worry. Here, like everywhere else, Jay sounds effortlessly on his game, and his easy-going, scene stealing nature sounds particularly facile pitched next to Kanye West, who still radiates over-anxious neediness, more desperate for approval than the last Bono in the pound.

But while ultimately Otis is a pretty serviceable bit of hip-hop, it doesn’t quite sparkle as it should. It’s like going for dinner with two Michelin starred chefs, and being presented with a pasta bake. Tasty, but slightly underwhelming.

Googling the phrase ‘Girls vomit’ probably isn’t to be advised. Who knew there’d be speciality websites out there dedicated to the messy conclusion to a night of all-female binge drinking? Yet on this occasion, it’s worth braving the messy world of the internet, for San Francisco’s Girls have produced something very special.

A mile away from the scuzzy, fuzzy pop that lit up their debut album, erm, Album, Vomit is a true epic: a slowly built lovelorn anthem of six and a half minutes, that throws in squealing guitars, an organ, a gospel choir straight from The Great Gig In The Sky, and Christopher Owens begging “come into my heart, my love” in a manner guaranteed to have you weeping like a small child.

It’s brilliantly barmy, totally over the top, but works beautifully. And yes, it is slightly similar to Guns N’ Roses‘ November Rain, but as Regina Spektor once said: “That solo’s pretty long, but it’s a pretty song”.

Swedish singer-songwriter Emil Svanängen (Loney, Dear to you and us, pal) has been round donkeys – since 2003, in fact – yet the mention of his name conjures question marks above the heads of most.

But the cream always rises to the top, as they say, and the lad may yet be on the verge of a belated, Ron Sexsmith-style breakthrough with his Hall Music LP. Just wrap your ears around My Heart (not literally); a rare beauty that stands, in Emil’s own words, “between joy and darkness”. Kerouac himself would be proud.

Summer Camp – Better Off Without You

Until last year, Summer Camp was synonymous with bratty American children being forced to play baseball while trying to hide alcohol from long-suffering supervisors. Since Elizabeth Sankey and Jeremy Warmsley appeared though, Summer Camp are now a byword for sparkly perfect pop.

Better Off Without You could be their best song yet, a joyous break-up song (produced by Steve Mackey of Pulp) that skips along without a care in the world, with Elizabeth sounding for all the world like a modern day Debbie Harry as she sneers “you’re so embarrassing when you cry / there is no me and you”.

It’s a marvellous taster for what’s shaping up to be one of the most anticipated debut albums of the year.

Bombay Bicycle Club. We were led to believe that they Had The Blues But They Shook Them Loose, yet now they’re after A Different Kind Of Fix? Curiouser and curiouser; as far as we can tell, the fix is very much the same.

Shuffle is nice, though. Its tour diary promo is nice. Heck, we’d even wager our nicest pair of slippers that the imminent sophomore album will be nice too. Such nice boys, they are.