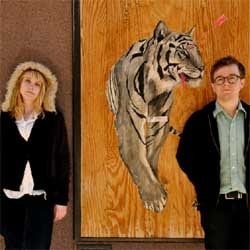 Welcome to the (unofficial) Wills and Kate Catherine Wedding Tracks Column! We’ve donned our very best Marksies chinos to delicately select with trembling fingers only the very best tunes for our future king and his beautiful blushing bride.

We’ll have no raging against machines here. It’s not the sort of behaviour that goes well with bunting, polite conversation and awkward diplomatic incidents involving the Crown Prince of Bahrain.

Wait, what? We’re not invited? You mean to say that our scrawled poems sent to minor royalty haven’t done the trick? Well, that’s just bloody charming, that is! One stays up all night trying to find a rhyme for “Princess Eugenie’s gorgeous ankles” and this is the thanks one gets?

Sod it then. We’re with you, oh plebeian reader – we wave our red flags, clasp our flat caps and cast off our chinos with pride; our tears born of anger, not the pain of a not-altogether-unexpected royal wedding snub. *sniff*

Baltimore duo Wye Oak are nothing short of brilliant, and their Civilian is a five-star album in a four-star guise: like all classic LPs, it slowly reveals its most treasured virtues over time (most unlike most royal marriages, don’t you think? Hah!)

Fish is one of Civilian’s most potent slow burners, and has been accorded the honour of one of the most beautiful video promos of recent years; even if we’re not entirely sure what the message is. Stick it on a double A-side with the incredible Holy Holy and what do you have? A single fit for a king, that’s what.

Oh, what a coincidence! It seems those pleasant Amateur Transplants chaps have also been led on by our powerless figureheads, and are now fighting back the best way they know how: sarcasm.

OK, so the tune is a rather obvious lift-off – and the last line is in cringingly poor taste – but the “unofficial” tag serves to pardon a whole host of sins. It’s not quite the greatest spoof song we’ve ever heard, but it’s topical, and that’s all that matters in this momentous week of weeks. Sort of.

You see all those gurning faces in the video, Kate? You see them?! Well, get used to them, because that’s exactly what you’re going to see all through your wedding night.

Sorry. Can you still be done for treason? Is imagining the face of the future king during his first evening together with his blushing bride treasonable? Is suggesting that what she’s going to gaze upon when she looks up is the face of a man morphing into his father in front of her very eyes treasonous?

SORRY. Really must stop. Must talk about Friendly Fires, who have a new retro-tinged single complete with gurn-heavy video celebrating the very best of late ’80s/early ’90s rave culture. Which they didn’t get a chance to experience first time around, on account of being about six years old. Lightweights.

It’s a shimmery, hands-in-the-air, glow-sticks ahoy beaut that will sound magnificent if you’re hearing it in a sunny field, but that does makes you slightly wistful if you’re trapped indoors.

Esben And The Witch – Chorea

When we dance like deranged zombies on windswept cliff tops, we’re given a stern talking to, a sugary cup of tea and a lift to the nearest bus stop. When Esben And The Witch do it, they wind up in an artsy black and white video and become the toast of the town. Where’s the justice in that, eh?

In fairness, their exploits are accompanied by Chorea, a rousing, chest-beating number from the recent EP of the same name. Ours are accompanied by childish whimpering, frequent coughing fits and the occasional sarcastic guffaw. That’ll be it, then.

Beyonc Who Run The World (Girls)

What with this, and Lady Gaga, and everyone sodding else deciding that pop songs are the new support groups, the charts are beginning to resemble the self-help stage of some kind of god-awful new age festival.

Although to be fair, the message behind this one is pretty astonishingly subtle. It’s almost imperceptible, like the cooings of a dove in a hurricane, but concentrate really, really hard and you’ll get it.

Is that empowering? Taking something someone else did two years ago and lazily re-appropriating it for your own means? Really? Fine. Girl Power.

Oh, and we don’t have a video, we’ve got a trailer, consisting of Beyonc riding a horse. Not entirely sure what it’s got to do about anything, unless this song is insinuating that the equestrian industry is actually run by some kind of shady female Mafioso. That’ll be a surprise to John McCririck.

If you’re in a band, there should be rules. Top of the list of rules should be Do Not Sound Like The Automatic.

Close behind should be Do Not Sound Like Los Campesinos!. So imagine what might happen if you took both of those rules and decided to break them both. At the same time.

You’d be better off with Ivananananananreitman.

Sparrow And The Workshop Snakes In The Grass

Sparrow And The Workshop’s 2010 debut Crystals Fall was something of a sleeper hit, the trio’s blend of folk, country and alt-rock propelling them into the hearts of the seemingly select few who heard.

Snakes In The Grass is another matter; the sort of extraordinary stop-start cacophony that will stop you in your tracks like a firm tug on the wrist. “Drop what you’re doing and listen!” it seems to cry.

With this effort the trio may cease to be a best-kept secret, but it’s a price well worth paying for tunes of this calibre. We await their sophomore album with baited breath.