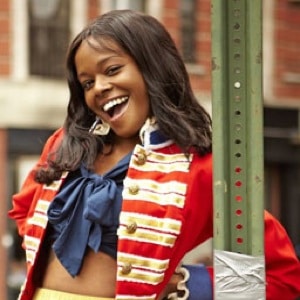 Integrity? In a politician? Don’t be daft. If you’re after integrity, don’t go looking for it there. Look for it here.

We ain’t for sale. We’ll tell you that for nothing. Although, just to be clear, should you like to employ the musicOMH tracks column team to talk at your corporate event about how to maintain integrity in the heaving cesspool of current existence, please get in contact to discuss fees.

There are no shady deals here. Nothing covered because of some massive financial reward. No cosy dinners. No brown paper packages tied up with string. Everything that is here is here because we believe. One way or the other.

Azealia Banks Fuck Up The Fun
There is rather a lot of expectation on Azealia Bank’s shoulders. Or hype. Whichever you’d like to call it. So, kudos for Fuck Up The Fun sporting absolutely no sign of that pressure. It’s short, sharp, bratty. And barely there.

It’s 150 seconds of Diplo delivered marching band drum rolls and Azealia reminding Madonna why snotty sassiness is a look best left to the young. And just for good measure you can download it for free.

Bright Light Bright Light – Waiting For The Feeling
Reading just a little (too much) between the lines of the video for Rod Thomas’s new single, Wales’ answer to Robyn is waiting for the feeling of sitting in a barber’s chair and having his head moved a little bit up, round, down. Each to their own, but what’s concerning us is his threads. They look a little fancy; he’ll not want to get hair all over them. And his barber doesn’t seem to have a hair-catching overall to hand. What kind of establishments do these pop stars frequent?

The better news is that the debut Bright Light Bright Light album Make Me Believe In Hope has finally been given a release date and hits music shops online and off in June. Going by this single, and its predecessor Disco Moment, we can expect more ’90s-imbued intelligent pop. And as the season of vests and tans approaches, that sounds mighty fine to us.

Garbage – Blood For Poppies
Like NAFTA, Justin Bieber and Diana Ross‘s love affair with choreographed penalty kicks, Garbage can trace their roots back to 1994, though their output in the intervening 18 years has been anything but prolific: forthcoming LP Not Your Kind Of People is just their fifth album proper.

So, is lead track (and free download, thankyouverymuch) Blood For Poppies worth every minute of its near seven-year gestation? If you’re sitting, waiting, wishing for minimal deviation from the classic Garbage formula – Vig pounding; Marker and Erikson thrumming; Manson flitting between broody and belting – then yes, it is.

Gabby Young and Other Animals – In Your Heade
Remember The Doop? We do. We bought the t-shirt; joined the fan club; learned the dance. Not a day goes by when we don’t wish some bright young thing – a critically acclaimed bright young thing on the verge of releasing her second album, preferably – would channel its spirit into something altogether less gimmicky, less repetitive, less cynical.

Step forward, Gabby Young, to stride the divide between Bellowhead and Florence Welch, and we’ll be forever in your debt…

Toy Motoring
For review purposes song titles are either a blessing or a curse. If you’re intending to wheel out of a series of puns, each displaying a depressingly predictable decrease in quality, then it’s the former.

But, should you want to say something meaningful about a track, and the phrasing happens to share a semantic relationship to some of the words in the title, it’s definitely the latter.

So. Motoring by Toy has a real relentless, driving propulsion about it. Sorry. It does. More happily, it also basks in a honey-coated, doomy nihilism that is both excellent and nothing whatsoever to do with cars.

S Carey – Two Angles
Sean Carey: drummer, dilettante, some-time member of Eau Claire delicacies Bon Iver and, since the 2010 release of his All We Grow LP, a legitimate solo artist.

Two years on, the good Mr Carey is prepped to deliver further preening of the bearded, becardiganed variety. But Two Angles – lifted from imminent sophomore album Hoyas – is also so more than that: having been cobbled together with little more than a laptop, its internal microphone and some stock software, the track is testament to the potential of home recording. It’s Bitsa for hipsters, essentially.

Simian Ghost – Curtain Call (Acoustic)
Swedish alt-folk trio Simian Ghost are starting to make waves, their second album Youth having plopped into the pond of pop (with a satisfying “sploosh”-type noise, we imagine) nary a few weeks back. Being the contrary sods we are, we prefer this unplugged take on album track Curtain Call to the acoustic treatment of its trackmate and bona fide-single-in-its-own-right Wolf Girl.

This Will Destroy You – Black Dunes
Like neglectful parents, we’re more than happy to let you play Flash videos and oggle mindlessly at the pretty sprites before your vacant eyes; at the very least, it keeps you from googling Tulisa‘s extracurricular filmmaking.

Ergo, the longer the clip, the better, and by our reckoning this effort by experimental noisesmiths This Will Destroy You will afford us more than eight minutes of quiet time before we have to again be on hand to prevent you banging your head on the banner ad, choking on loose code or tripping over backlinks. In other words, this won’t destroy you – the rest of the internet will.

Because PT Cruiser is ace. Like going on a neon-lit road trip across the gothic badlands of Vegas with The Stooges for company.

Surely that’s a description that could be applied to every single single ever recorded? But no. Guess again. It’s rare that a song sounds like the perfect encapsulation of said band. A Baudrillian simulcra of an existence brought to life in 2:47 seconds of messy, pop punk perfection.

Or, whatever. Flipping great song. By The Cribs. Sounds like The Cribs. From the new album by The Cribs. It has wonky verses, scorching choruses and is fantastic.