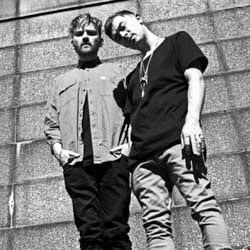 Another day, another dollar, and another palm to the face as the music industry continues its relentless quest to garrotte the senses in glorious technicolour. R.E.M. split; The X-Factor‘s US TV ratings bite the big one; Facebook wades into the media sharing sphere with its steel-toed, clod-hopping size twelves.

We can only begin to guess at this week’s unfolding headlines. U2 split? The Old Grey Whistle Test recommissioned for a 10-year run? U2 split? Friendster spearheading the next social media sensation with the release of its wifi-enabled eight-track player? U2 split…?

Of course we realise by now that wishful thinking butters no parsnips (were the case otherwise, we’d be sporting more than just this dishevelled, moth-eaten look for our pioneering efforts in jazz-punk fusion) and that it’s better to live in the now, keep the scene alive, and other such clichéd rock ‘n’ roll soundbites. And that’s what makes the tracks column an indispensable handbook of the contemporary musical arts, right? Right?

The Big Pink were right – girls really do fall like dominos. But then again so do boys. And illegitimate totalitarian regimes. Not Weebles, though: Weebles wobble but never fall down.

With long-awaited follow-up LP Future This penned in for a January 2012 release, hopes are high for Furze and Cordell after the well received exploits of their 2009 debut A Brief History Of Love. Yet the initial impression is that Stay Gold is the sound of the nouveau riche trying not to poison the well: a stylistic rehash of their breakthrough sound, all trappings intact. If it ain’t broke don’t fix it; Stay Gold indeed. But let’s wait to see what The Big Pink have in store for us in the new year.

So this is what the kids are going mad for these days, is it? Hypnotic, well considered, genre-redefining electronica? It was Black Lace‘s Superman in our day. Didn’t do us any harm.

Mondkopf’s Gallic grace shines through Day Of Anger, its deftly-handled creepiness endowing each crashing thud with artistic merit above and beyond its club-oriented station. It certainly bodes well for the long player, and just look: another avante garde black and white music video for your delectation. Job’s a good ‘un.

The Opiates – Anatomy Of A Plastic Girl

Jill-of-all-trades Billie Ray Martin has been there, done that, sold the t-shirt; active since 1990, she’s a dance-pop impresario, both solo and as a serial collaborator (including a stint with S’Express). Her latest incarnation is The Opiates, with Norwegian downtempo practitioner Robert Solheim.

It is in this guise that BRM may just strike pay dirt, because Anatomy Of A Plastic Girl – taken from forthcoming album Hollywood Under The Knife – resonates in the mind: a stylish, elegant and disturbing meditation on image (“The a tale of a young wannabe actress in LA who reflects on her facial surgery that has left her scarred and punctured with holes inside and out”), it’s a beautifully gloomy, provocative and NSFW-ish brooder to pause upon as the nights draw in.

Kele – What Did I Do

So Kele’s gone to live in New York and make dance music, has he? What – are we just not good enough for him now? Is he above slumming it with honest, old fashioned British hipsters and their scything social media broadsides? Above miserable summers, HP Sauce and smelly pensioners? Above Greggs? Pssh.

We’ll tell you what you did, Kele: you shaved your bonce, delved into dance and strutted around a moody Gap ad of a music promo. We hope you’re proud of yourself, sunshine, because we… Well, we’re actually rather fond of this; it reverberates with the yoof culture charisma of its versatile creator, and rumbles along like a cathartic dancefloor stint. Good show, old son.

For a band named after a Ryan Adams song (City Rain, City Streets) and for a band whose songwriters met at a Ryan Adams gig, City Reign doesn’t sound an awful lot like Ryan Adams. Their sound is more dynamic; more Idlewild; more We Were Promised Jetpacks.

2010’s Making Plans gets a second bite of the cherry as lead track on their forthcoming Numbers For Street Names EP, and it proves to be a moment well worth revisiting: pulsating, reassuringly overdriven, bursting at the seams with its own momentum. They don’t make them like this anymore. Apart from this. Obviously.

Remember Fall Out Boy? No, neither do we. Actually, that’s not entirely true: we seem to recall that the lead singer was completely bald under his perpetually-worn scenester cap, like Rool the Brownie in the touching final scenes of Willow.

Which sort of helps us grade the levels to which Patrick Stump has sold out: gone are the empty, soulless, despondent eyes that led the pop-punk outfit to new depths of inanity; in come Photoshopped Bobby Dazzlers, like two LEDs on an airbrushed flan of despair. Gone too is the naturally depilated cranium; in come bank-breaking and suspiciously luxurious hair plugs (we “allege”). Still present – the apathy-inducing caterwauling. Shame, that.

Manic Street Preachers – This Is The Day

What better way to mark the release of your tour de force, career-encapsulating powerhouse of a best-of than to… cover a minor 1983 hit by multimedia institution The The? Bingo!

But this is a rather splendid rejigging, perhaps even preferable to the “exclusive new tracks” appended to most retrospectives. It comes complete with a priceless Manics montage covering the last 20 years – like a big nostalgic game of spot the single – and judging by the vivacity of the track, there’s surely life in the old dogs yet.

And finally – no, not a squirrel on a skateboard – but a passage of pop promo perfection produced towards the tail end of a stellar 30-year innings. R.E.M., take a bow.